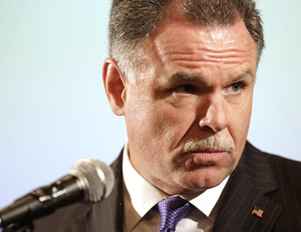 Chicago Mayor Rahm Emanuel fired Police Chief Garry McCarthy today. Mayor Emanuel and now former Police Chief McCarthy were at the center of a high-profile crisis, with protests, some led by the Rev. Jesse Jackson, calling for their removal.

Protesters reportedly shut down the Apple Store, Niketown, and the ritzy Water Tower Place shopping mall on Black Friday, causing what some are estimating to be millions of dollars in losses for those and other businesses. Protests continued this weekend, as a group of demonstrators carried a coffin to City Hall, Jackson’s weekly community rally included calls for a federal investigation of the Emanuel administration, and the NAACP ventured to the city to take part in demanding justice.

NAACP President and CEOÂ Cornell William Brooks was even reportedly arrested with several seminary students and others during protests Monday.

We need our police officers to protect, not persecute. #LaquanMcDonald #NAACP pic.twitter.com/2L3KlhZBlT

The police officer who shot 17-year-old teenager 16 times, point blank should be jailed without bail; for starters. #LaquanMcDonald

Activists say recent actions of the police, the Emanuel administration, and the local prosecutor, State’s Attorney Anita Alvarez, support allegations that there has been a cover-up in the 2014 fatal shooting of a teenager named Laquan McDonald, who was shot 16 times by police officers. Officer Jason Van Dyke has been arrested and charged with murder, but the recent release of dashcam video of the incident set off demonstrations that disrupted shopping along Chicago’s Magnificent Mile.

Officers previously reported that McDonald lunged at officers with a knife and that he was shot one time. After tips from whistleblowers in law enforcement, journalists discovered that McDonald’s autopsy revealed 16 shots, with nine of the bullets striking the teenager’s back.

Reports also indicate that the district manager for a nearby Burger King said that police took the restaurant’s security camera video that had 86 minutes of footage that never saw the light of day, having apparently “mysteriously vanished.” Chicago police have denied allegations that police deleted the footage.

Protesters and activists also point to the fact that the Chicago City Council approved a $5 million payment to McDonald’s family within weeks of the killing before a full investigation or the family had even filed a wrongful death lawsuit. They also point out that the officer who shot McDonald had 17 civilian complaints on his record–including three for allegedly using excessive force–and in one case, the city settled a complaint for $500,000.

The video showing McDonald’s killing was released recentlyÂ because a judge ordered it after months of legal battles with the Emanuel administration and the state’s attorney to keep the footage under wraps until the city could prepare for the aftermath.

Celebrities and others have shown solidarity in raising more awareness of McDonald’s case as well as a call for justice:

Van Dyke, the officer involved in the case, has a bail set at $1.5 million,Â and according to reports, 10% of the bail set by the judge–or $150,000–to secure his release. More protests are planned through the week as further updates on the case are made public, and officials are prepping to respond.