Black Actress: Andrea Lewis Takes Matters Into Her Own Hands 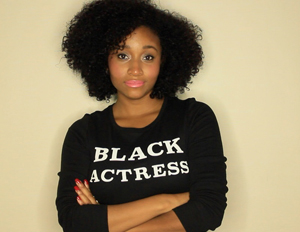 Toronto native Andrea Lewis is an actress who’s worked with stellar talents including Diahann Carroll, Wesley Snipes and Maya Angelou. Since landing roles in Down in the Delta and The Natalie Cole Story, the millennial star is now welcoming this new wave of digital and social technology as producer of her own web show. The series Black Actress, a product of Lewis’ production company Jungle Wild Productions, tells the stories ofÂ Andrea and her famous friends, plus Andrea’s character Kodi Bailey. Jenifer Lewis, Amber Riley, Tatyana Ali and Vanessa Bell Calloway are a few of the faces viewers get to see. BlackEnterprise.com caught up with the multitalented artist to talk about the series, what’s next and more.

Andrea Lewis: Black Actress is a series that I created that celebrates black actresses and gives insight into the trials and tribulations of pursuing a career in the acting business. The series is documentary-meets-scripted-program, with every episode opening with a candid interview from a celebrity black actress. The scripted story follows the character Kori Bailey, played by myself, as she pursues her career in New York City and balances having a life and pursuing her passion. I produce the series with Tatyana Ali, Essence Atkins and Issa Rae, and you can watch the series on myÂ YouTube channel.

What inspired your career as an actress?

I started acting when I was a toddler. My mom was approached by a casting director at the mall when I was only a year old. From there I started doing baby modeling and commercials. As I got older, I progressed to bigger roles on TV and in film. I fell in love with acting and entertaining very quickly, and it became my passion.

If you could change one thing about Hollywood, particularly as it relates to black women, what would it be?

I would change our position on the Hollywood food chain, and I would make it a more even playing field. Hollywood is a boy’s club and it’s hard for women—[especially] black woman. We’re making some pretty good strides right now with having more roles that feature women of color and having more black women behind the lens, but the question that keeps coming up is, “Is this a trend?â€ I truly hope it’s not, and the only way to change it is by climbing the ladder and making our position in Hollywood a permanent one.

In celebration of Women’s History Month, which women actors have you admired and why?

There are so many to choose from. I worked with Diahann Carroll on The Natalie Cole Story. I love her because she’s the epitome of class and she’s broken so many barriers for black actresses. Her courage is so admirable.

Essence Atkins is one of the producers of my seriesÂ Black Actress, and I absolutely love her. I grew up watching her on TV and she’s not only an amazing comedic and dramatic actress, but she’s also an amazing person. She’s influenced my life in many ways and I’m truly grateful to know her.

What’s next for your company Jungle Wild Productions?

This is a big year for my production company Jungle Wild, alongside Black Actress we’re releasing three new shows and working on a our first feature film. I’m so excited for everything we’re doing because we’re focusing on diversity and the voice of millennials.

You’ve done a good job taking advantage of YouTube to enhance your own brand and create your own projects. How necessary do you think this is for black actors, and what are other ways that young black actors can take advantage of digital and social media resources to initiate their careers?

I think we’re in the age where everything and everyone is a brand, and depending on what you do with your personal brand it can advance your career in an amazing way. I think it’s very important to use your social media as a platform to showcase your work and shamelessly promote yourself. I was able to take my career into my own hands by using the internet to my advantage, so I always advise for any actor, especially actors of color, to treat your social media as your business card. Your social media should represent your work and character.

If for one day you could be one actor from the past, who would it be and why?

I would be Dorothy Dandridge, I’d love to be on the set of Carmen and to experience the magic of that time.

Stay up to speed with Black Actress and Andrea’s social media here.