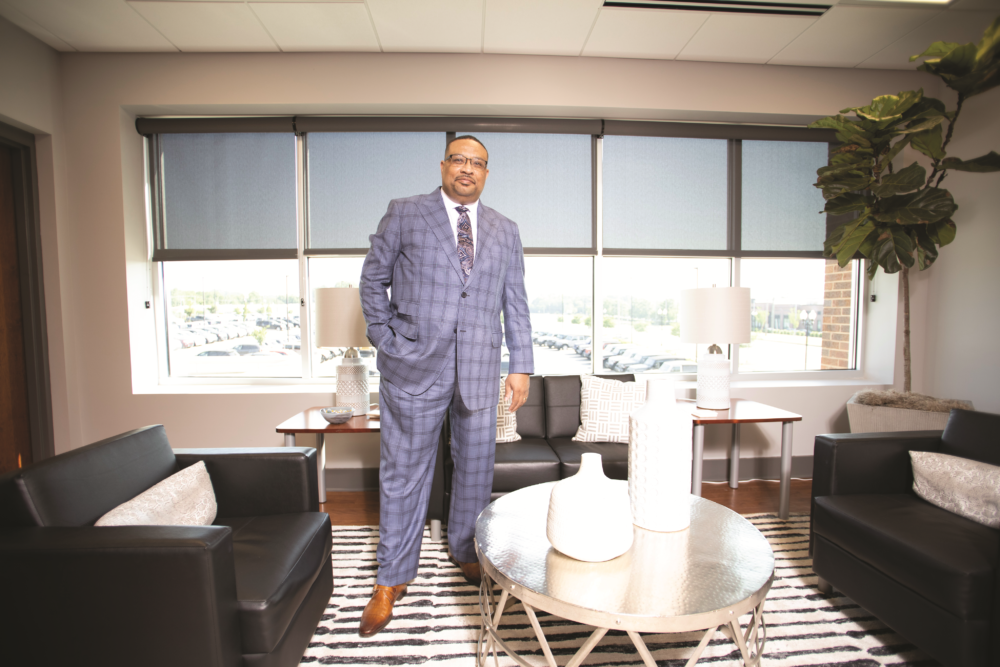 Throughout the automotive industry, it was known as the “Crash of 2009”—a year in which hundreds of franchises were wrecked by the colliding forces of the Great Recession, the financial sector meltdown, and two of the world’s leading car manufacturers’ forced bankruptcies. For Damian Mills, a young auto dealer who acquired his first franchise five years earlier, that series of events represented the turning point for his nascent enterprise.

In 2004, Mills had purchased Classic Ford of Smithfield, North Carolina, in a deal that required him to put up his life savings to fuel his entrepreneurial ambitions. By 2006, he added a Chrysler dealership in Fort Mills, South Carolina, to his budding mega dealership. But his plans seemed to have taken a detour when Chrysler became one of the automakers that filed for Chapter 11 bankruptcy and threatened to terminate agreements with dealerships. Mills was concerned about not only losing his investment but focused on the livelihood of dozens of employees.

The dire situation represented his moment of truth. “Conventional wisdom tells you to sit on the sidelines. But in business, that’s the time you have to get in and take action,” Mills says as he recounted the experience to an audience of entrepreneurs at FWD, BLACK ENTERPRISE’s recent business conference. “I used the recession not for contraction but as an opportunity because every business was put on sale. People were not going to go from driving cars to riding horses.”

Using his strong banking relationships, Mills decided to “aggressively pursue opportunities at a discount the way Warren Buffet would.”

To his credit, Mills viewed his staff among his most valuable assets. Driven largely by faith, he decided not to lay off a single worker. Instead, he consolidated positions that opened up through attrition. To keep the dealership moving forward, he enlisted employees to conjure up creative ways to reduce expenses without affecting jobs or the company’s 401(k) match program. And the company also began selling used cars in addition to new models.

As a result of these measures, Mills was able to keep his Chrysler dealership; add Ford/Lincoln, Nissan, Chevrolet, and Fiat stores; and ignite revenues at all dealerships by 52% between 2009 and 2010. “When you get people involved in the process, they kind of surprise you. We were able to bounce back because of the flexibility and resilience of our people.”

Mills & Co.’s dexterity in shifting gears during one of the most tumultuous periods in the auto industry positioned it for future growth. Based on its financial performance in 2009, Mills Auto Group made its debut on the 2010 auto dealer list, snaring the No. 12 spot and outstripping dealerships that had been BE 100s mainstays for decades. Its upward trajectory demonstrated that the company’s strategic focus, operational prowess, and the horsepower of its talent would make it a formidable competitor for years to come. Expanding to 14 dealerships in four states—North Carolina, South Carolina, West Virginia, and Maryland—Mills Auto posted revenue from $99 million in 2009 to $474 million a decade later—a phenomenal 379% revenue growth that made it the fifth largest black-owned auto dealership in the U.S.

It has earned a well-deserved reputation for being a fine-tuned machine. The methodical Mills has driven his company to provide killer customer service, accelerate revenues and profitability, and increase productivity through the creation of an environment emphasizing mentorship and financial incentives. Due to its demonstration of perseverance, innovation, and excellence, BLACK ENTERPRISE has named Mills Auto Group as the 2019 Auto Dealer of the Year.

Mills didn’t have a dream car as a child. Raised in a working-class African American community in Garyville, Louisiana, he was grateful to just simply ride around in his parent’s Chevrolet Impala. “Where I grew up in Louisiana, it wasn’t a matter of having a favorite car. You just wanted a car,” he told BE.

Growing up, Mills also didn’t imagine himself as the successful businessman he is today: “Where I was from in Louisiana, I did not see a lot of African American entrepreneurs. I saw a lot of hardworking individuals like my mother, who has been in the school system teaching for 50-plus years.”

It wasn’t until he graduated from East Saint John High School in Reserve, Louisiana, and attended North Carolina A&T in 1991 that Mills was introduced to business as an option. “It was the first time that I actually saw a self-made, very successful entrepreneur at an event at A&T, and his name was Joe Dudley,” says Mills of the titan who hailed from the hamlet of Aurora, North Carolina, and became CEO of Dudley Products Inc., a multimillion-dollar haircare and beauty empire. “It was in that moment that I realized the opportunities that exist if you apply yourself are exponential. My eyes were opened. Up until that point, I wanted to be an attorney.”

Unlike many students, Mills did not return home after completing his freshman year. “I couldn’t afford to go back home and I didn’t really have a job lined up back in Louisiana.” Following his mother’s advice, he enrolled in summer classes and began looking for a local job. “I opened up a newspaper to try to find me something, and there was a bunch of car ads.” As a result, he applied for sales positions at car dealerships along Wendover Avenue in Greensboro. Since he didn’t own a car, Mills “had to walk from dealership to dealership” to find work.

After constant rejection from auto companies, the exhausted but determined Mills walked into Crown Dodge, then owned by Crown Automotive Group, and told the owner about his streak of bad luck earlier that day. “I don’t know if he felt sorry for me or if he was impressed by my tenacity, but I interviewed and he gave me an opportunity.”

A quick study, Mills became acclimated to sales and discovered he had a knack for selling cars and reading people. So rather than quit at the end of the summer, he kept his job at the dealership while carrying a full load at college.

By his second year at Crown Dodge, he was earning six figures and forged strong ties with Reggie Mans, an African American sales manager who became his mentor. In addition to learning “the nuts and bolts” from Mans, the relationship ignited his passion for the industry.

Despite his early career success, Mills became keenly aware of the absence of African Americans in leadership positions and became concerned that his career would eventually stall. But his talent and diligence ensured his ascension. Recognized as one of the top sales associates within Crown Automotive Group, he earned a promotion to finance and insurance manager at the age of 25 and became the youngest general manager of Crown Dodge. By 1998, he was named partner at 28 years old.

The Road to Ownership

In 2000, Asbury Automotive, one of the nation’s largest automotive groups, acquired Crown Automotive, and the shift in ownership placed Mills in the role of sales director, responsible for more than 22 dealerships in three states. However, the young, married executive with three children, a stable income, and promising career says “this itch came and I wanted to own my own dealership.” Thanks to advice from a colleague, he enrolled in Ford Motor Co.’s dealer development program, which offered training and financial assistance to entrepreneurs who aspired to own a franchise. Mills took the ultimate leap of faith, leaving Asbury to purchase his own dealership.

By 2004, Mills, who took a 60% pay cut, owned Classic Ford after using his savings and gaining a loan from Ford to finance the deal. While it normally takes new owners several years to pay off the Ford loan, Mills says that “we were blessed to pay it off in two years.”

After dealing with the challenges of the Great Recession, Mills built management muscle and a strong team that put his dealership on the road to growth. Through acquisitions, Mills Auto expanded to include Crossroads Chevrolet in West Virginia, three South Carolina stores—Classic Ford Lincoln of Columbia, Stateline Alfa Romeo, and Stateline Chrysler Jeep Dodge Ram Fiat—along with seven North Carolina locations: Classic Chrysler Jeep Dodge Ram of South Charlotte, Classic Ford-Lincoln of Shelby, Classic Hyundai of N. Wilkesboro, Classic Ford of Smithfield, Classic Nissan of Statesville, Classic Nissan of Sanford, and Classic Toyota of N. Wilkesboro. In 2013, he opened Classic Chrysler-Jeep-Dodge-Ram in Goldsboro, N.C., followed by the opening of Classic Kia of Ellicott City, Maryland, in 2014. Earlier this year, he acquired a Maserati franchise in Fort Mills, S.C., his first ultra-luxury dealership.

“My vision has always been constant and consistent growth,” asserts Mills. And he has the managerial chops to get there. For instance, he runs a lean operation that stresses cost reduction, increased margins, and organic growth. In advising other entrepreneurs at FWD, he offered an inside look into his process. “Most people make mistakes in their forecast,” he told them. “Just don’t look at top-line sales. You have to not only know what you are grossing per employee but what you are netting per employee.” By doing so, business owners can gain a clear picture of the factors driving expenses—especially in businesses like auto dealerships which have razor-thin margins. Moreover, he tells entrepreneurs to be well versed in “understanding the KPIs [key performance indicators] within your industry.”

Mills’ secret weapon: His ride-or-die management team. Kelly Alston, Mills Auto’s Variable Operations Director, says he’s been with the company for the past 12 years due to Mills’ character and leadership. “He’s a very focused, extremely honest and very trustworthy person to work for,” Alston says. “When you think big-time car dealer, you have this expectation of a guy who may be a little bit stuffy. That’s not him.”

Jeffrey Cropp, director of Corporate Development, agrees. Mills convinced him to leave his corporate job six years ago. “He was someone that I was willing to follow,” Cropp says. In addition to being a strong business leader and a visionary, he maintains that Mills is “a dealer of hope.”

Driving Inclusion in the Industry

Cropp further states that the fact that Mills is a first-generation dealer is inspiring: “I think he’s shown other young, aspiring African American dealers that they can do it, too. He’s been a strong mentor in this industry.”

Expanding African American leadership, ownership, and empowerment continues to be a part of Mills’ focus. As a former president of the Chrysler Minority Dealers Association, he helped established a Future Dealers Alliance to mentor and nurture future minority dealership managers. He also sits on the board of the National Association of Minority Automobile Dealers (NAMAD). “Damian has at least between 10 to 12 mentees, who he has hired and groomed into leaders,” says Damon Lester, president of NAMAD, adding that many of Mills’ mentees work as managers within his dealership group. “He’s definitely been able to multiply what he has learned by teaching others in the business, other people of color in the business, how to run stores, and urge them to become dealers as well.”

Mills continues to gain such accolades as being named to Automotive News 40 Under 40 a few years back. However, he doesn’t believe in resting his laurels. Remembering the opportunities he parlayed from the industrywide crisis a decade ago, Mills plans to make his mega dealership unstoppable. He embraces the individual and organizational “stretching” that takes place in response to major disruptions and course-correcting challenges. According to him: “You have to get to your area of discomfort to realize your full potential.”