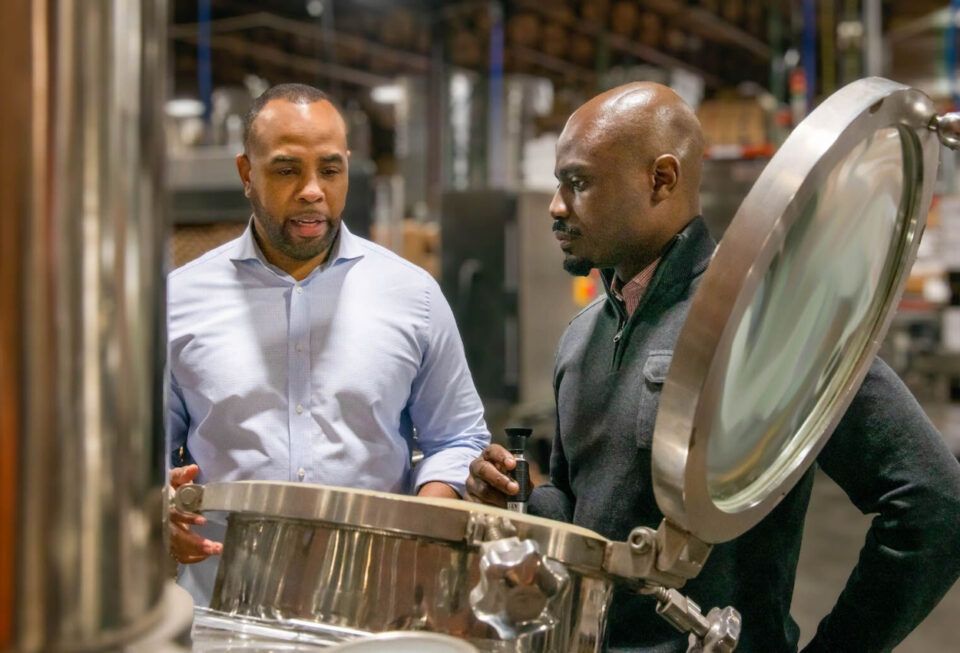 Chima Burey was with friends at a bar when one posed a question; if you can have your own flavor of alcohol, what would it be?

“When the conversation came to me, I suggested a salted caramel liquor similar to how Fireball is reminiscent of hot cinnamon,” Burey, who holds a B.S. in finance from the University of Florida told BLACK ENTERPRISE.

“I said I would do something reminiscent of a Werther’s Original or Sugar Daddies candy, and they were like, wow, what a great idea.”

A few years later, Burey relocated to Miami from New York. About a year after he moved, his friend, Amani Macaulay, who had spent the last few months traveling, hung out with Burey for a few weeks.

“One night, we’re having drinks and just talking, and I say, ‘hey man, what are you going to do next?’ And he said, ‘I’m open,’ so I said I think I have this idea from years ago, and at this point, Jack Daniels had just come out with Tennessee Honey, and Crown Royal Apple had just come out.”

That started a four-year journey for the men, which resulted in Duke & Dame, a premium whiskey that contains a robust salted caramel flavor and just the right amount of sweetness without the harsh aftertaste of traditional whiskey.

“Whether it’s Fireball or even just regular whiskey, when you take a shot, you typically make that whiskey face and kind of cringe,” said Burey.

“The responses to Duke & Dame were the opposite; people were like, wow, this is amazing.”

The two men spent those four years working hard, developing Duke & Dame’s taste, running tests, giving samples to friends and family, and working with a distillery on the final product.

“A lot of brands go in and say, hey, I want to make this, I want to make that, and can you tell me how to do it,'” said Macaulay, who holds a Master of Business Administration from Columbia Business School and a Bachelor of Science from Cornell University. “We kind of walked in and said this is what we want to make, here try this, and that’s kind of how we started.”

The next step was distribution and building a customer base, which they did by getting out and meeting with independent liquor stores and customers, giving out samples, and building relationships. Macaulay and Burey were so successful in networking that within weeks of launching Duke & Dame, they began receiving purchase orders from Total Wine, one of the biggest liquor retailers in Florida.

“We got our first purchase order within two-and-a-half to three weeks of launching the brand,” Macaulay told BLACK ENTERPRISE.

“Two weeks later, Total Wine gave us our first purchase order, and we were hoping that they would put us in two stores. Instead, the distributor said we have the entire state, which at the time was 28 stores.”

While it may seem like it’s been a smooth ride for Duke & Dame, Burey and Macaulay have had their share of challenges, especially when it came to the COVID-19 pandemic. However, the two men saw the supply chain issues coming, which helped them circumvent several issues, including bottles.

“There was a glass shortage; you had big brands that couldn’t get enough glass bottles, but we saw that coming, and as we’re doing purchase orders for our bottles, we thought, hey, you know we’re going to need some more so we completely switched our glass manufacturer to a local U.S. base company in Georgia that really helped us avoid that issue,” Burey said.

Burey and Macaulay now have big plans for the future, including new flavors and products, but they’re keeping a lid on that news. For now, the sweet buttery taste of Duke & Dame caramel whiskey can be enjoyed straight, used in an Irish coffee, or in your favorite cocktails.