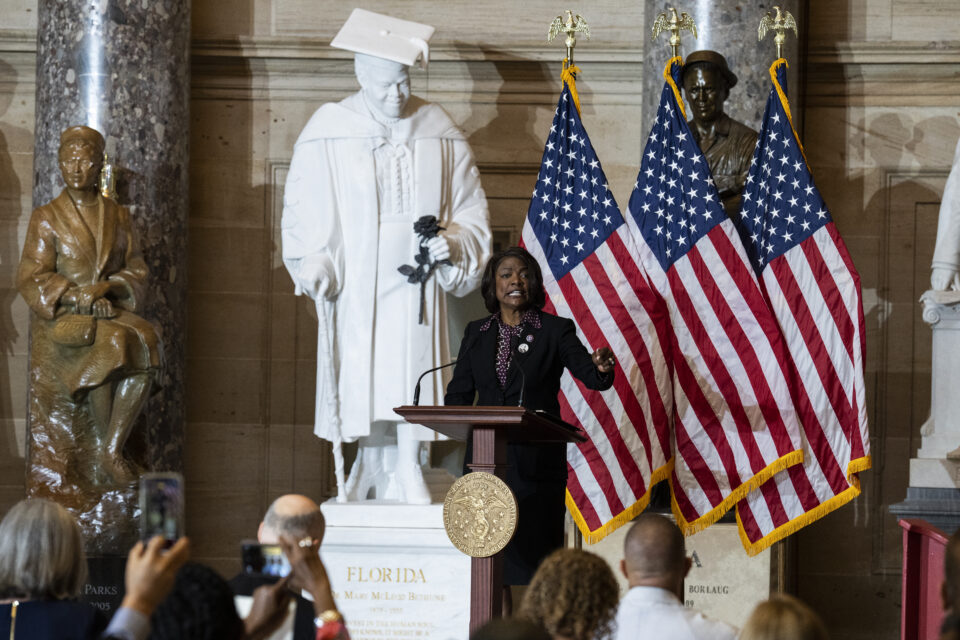 The daughter of formerly enslaved parents, Mary McLeod Bethune, remains one of the most trailblazing Black educators, civil and women’s rights leaders, and government officials of the 20th century. Her timeless contributions will now be immortalized.

A statue of the prominent Florida resident was unveiled in the National Statuary Hall at the U.S. Capitol on Wednesday, making Bethune the first Black American to have a state statue in the hall’s collection, Axios reports.

Bethune’s statue replaces that of Edmund Kirby Smith, a general of the the Confederate States Army.

During the unveiling ceremony, Speaker Nancy Pelosi called the replacement “trading a traitor for a civil rights hero.” This renewed focus is a step in combating the white supremacist values of the Confederacy, as 73 Confederate statues were removed or renamed in 2021, according to a report from the Southern Poverty Law Center (SPLC.)

The 11-foot statue, which visually commemorates Bethune’s devoted advocacy for education, features her smiling in a cap and gown with a black rose clutched in her left hand.

Rep. Frederica Wilson (D-Fla.) said at the ceremony, “Today we are rewriting the history we want to share with our future generations. We are replacing a remnant of hatred and division with a symbol of hope and inspiration,” per Axios.

Born on July 10, 1875, Bethune was one of 17 children who learned how to pick hundreds of pounds of cotton daily in her native South Carolina, according to the National Women’s History Museum.

After the Civil War, Bethune graduated in 1894 from the Scotia Seminary, a boarding school in North Carolina, before attending Dwight Moody’s Institute for Home and Foreign Missions in Chicago. With no funding for missions, she opted to become an educator.

Bethune, determined to support her son, went on to establish a boarding school, the Daytona Beach Literary and Industrial School for Training Negro Girls, in Florida. Eventually, the school became a college, merging with the all-male Cookman Institute to form Bethune-Cookman College in 1929. The institution issued its first degrees in 1943.

As she fought to end discrimination and lynching, Bethune was also ensuring that the Women’s Army Corps, was racially integrated as a member of its advisory board. She was also appointed by President Harry S. Truman to attend the founding conference of the United Nations in 1945, where she was the only Black woman.

Additionally, Bethune was a journalist writing for Black leading newspapers such as the Pittsburgh Courier and the Chicago Defender. Her life’s work ignited her business ventures in a Daytona, Florida, resort and the Central Life Insurance Co. of Tampa.

As BLACK ENTERPRISE previously reported, A Dollar Fifty Productions L.L.C. announced its development of an untitled biographical film on the life of Mary McLeod Bethune, with filming to begin in the first quarter of 2023 in and around Georgia.

The script highlights how the educator “overcomes the rejection of being a missionary in Africa due to racism to find renewed purpose in a Florida coastal railroad town in the 1900s, leading to her being one of the most celebrated heroes of American history,” per the company’s press release.