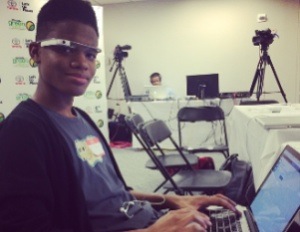 Black Enterprise’s Driving Innovation Hackathon presented by Toyota has come to a close, with all four teams creating amazing environmentally friendly apps in as little as 24 hours.

The winner, team Viza, walked away as the champion, showing how to integrate environmental friendliness, conscious consumerism, and smart business decisions into a single app.

The Hackathon was hosted by Mary Pryor and Mike Street, who interviewed judges and developers throughout the Hackathon.

Fourth place went to Makazi Mtingwa and Natasha’s Court founder Candida Haynes for their app Greenbux Trivia, an augmented reality gaming app that empowers small minority businesses and community networks to make lifestyle choices while they walk around and discover their neighborhood.

In second place came Elnerdo, the environmental platformer game by Andre Smith and Jason Scoon, who were acquaintances before the event took place. “I’m really glad to work with Andre,” Scoon said. “We talked about getting me more into game development since that’s more of my specialty as opposed to Andre being on the web…It was a pretty good opportunity to…start building our own product together.”

Lincoln, a veteran in the programming community, let the younger developers and provided them with guidance. “I’m in the background, I’m letting these kids lead the way…we can learn a lot from them,” he said.

Viza is a data-driven, decision making app that uses a more mature gamification aspect to encourage environmentally conscious decision-making that will save money and give you points on a community-driven leaderboard for buying eco-friendly soap, carpooling, and using less water and electricity.

All the judges grilled each team on various elements of their presentation, from the backend software behind the apps to the reason they chose certain elements and business plans.

Priforce gave a very essential piece of advice at the end of the presentation portion of the Hackathon. “Don’t be afraid to use the world ‘black’ in your ideas,” said Kalimah. “Silicon Valley is hungry for apps in smaller niches that cater to minority businesses.”

In the end, the Driving Innovation Hackathon helped bring diverse coders together to learn from one another and to help create the next killer apps for businesses looking to made green decisions while making some green in the process.

Black Enterprise would like to thank everyone who attended for making the event a success. Another Hackathon is most certainly on the way, and will be bigger and better, so make sure to check out Black Enterprise for more information and news on business, technology, and entrepreneurship.