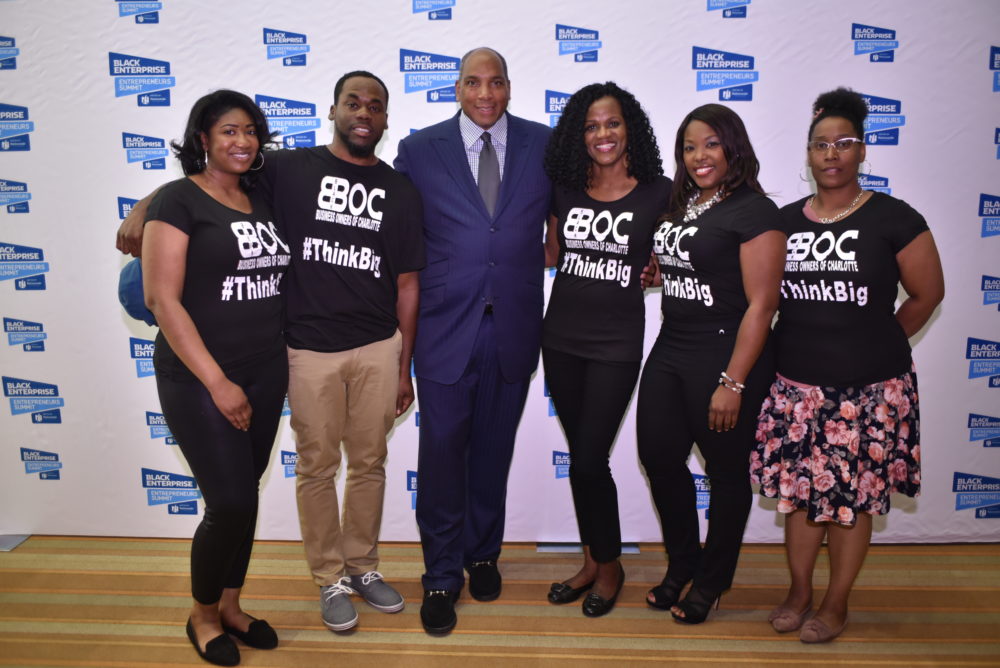 The buzz among Charlotte, North Carolina’s business leaders, entrepreneurs, and government officials has been palpable, generating excitement for what has been called “the business event of the year.” They’re all talking about and socializing the Black Enterprise Entrepreneurs Summit (#BEintheQC) to be held at the Charlotte Convention Center from June 6–9.

Scores of representatives from business and political circles—high-powered corporate executives and prominent company owners to influential politicians and county officials—could be found at a special press conference on Thursday at the Wells Fargo Auditorium in the heart of the Queen City.

Black Enterprise CEO Earl “Butch” Graves Jr. asserted why the three-day conference, which is expected to attract 1,200 attendees, was so vital to African American entrepreneurs on a local and national level: “Our Summit is addressing the greatest issue facing black businesses. I argue that the biggest challenge to our companies isn’t the lack of access to capital. It’s scale. Currently, 95% of black businesses are sole proprietorships, which means that most black entrepreneurs are employing themselves. We are using this event to help them build capacity so that they do business with large corporations and as a result, employ large numbers of African Americans and impact on our communities.”

Graves also told the press that it will serve as a powerful platform to reveal such opportunities as the future development of Brooklyn Village in Uptown Charlotte. The Mecklenburg County Board of Commission’s recent selection of a partnership led by The Peebles Corp. (No. 35 on the BE TOP 100 with $102 million in revenues), the nation’s largest black real estate developer, to advance this $680 million, 17-acre redevelopment, will expand minority business. Details of contracting opportunities for black-owned companies will be shared at the Summit.

Under the theme, “Connect, Build, Elevate,” the Summit will address issues confronting today’s business owners, including how to handle daunting competitive obstacles, leverage technology to achieve greater efficiency and profitability, and learn to pivot in an increasingly fast-paced, chaotic environment.

At the press conference, representatives of the 48-year-old multimedia company, which is working closely with Charlotte’s economic development team and corporate community, offered a preview of the event offerings:

At the press conference, Charlotte Mayor Vi Lyles offered among the city’s many accolades—including the fact that it was cited as the No. 3 locale in the country for business owners to launch a company—her pride “that we are the only city hosting the Black Enterprise Entrepreneurs Summit.” As such, the event will include local sessions in which Lyles and Columbia, South Carolina, Mayor Stephen Benjamin will discuss business opportunities within one of the nation’s fastest-growing regions as well as a town hall for Charlotte-based entrepreneurs to gain access to government financing and contracts, among other areas.

In fact, the press conference provided an opportunity to demonstrate growing corporate support for the conference. One such speaker at the gathering was Regina Heyward, senior vice president and head of supplier diversity at Wells Fargo, one of the Summit’s major sponsors. Citing that entrepreneurs are “driving the country forward with grit and tenacity,” Heyward said that Wells Fargo’s partnership with Black Enterprise serves as an extension of its focus to bring more minority businesses into its supply chain. According to Heyward, over 11% of the financial giant’s procurement dollars—a whopping $1.27 billion—were spent with diverse businesses last year. In addition to “having an economic impact on small and mid-sized businesses, Heyward shared with the audience  that one of its largest vendors is workforce solutions firm Act-1 Group (No. 2 on the BE TOP 100 WITH $2.8 billion in revenues), and that Wells Fargo has spent $57 million with the company over two years.

Councilmember James Mitchell, chair of the local steering committee, also said that efforts have been developed to spotlight and attract millennial entrepreneurs throughout the region. In fact, he announced sponsorship of Black Tech Charlotte Interactive to attend the Summit as well as “scholarships” offered by local businessman Lenny Springs and the city to register an additional 10 startup companies run by young entrepreneurs.