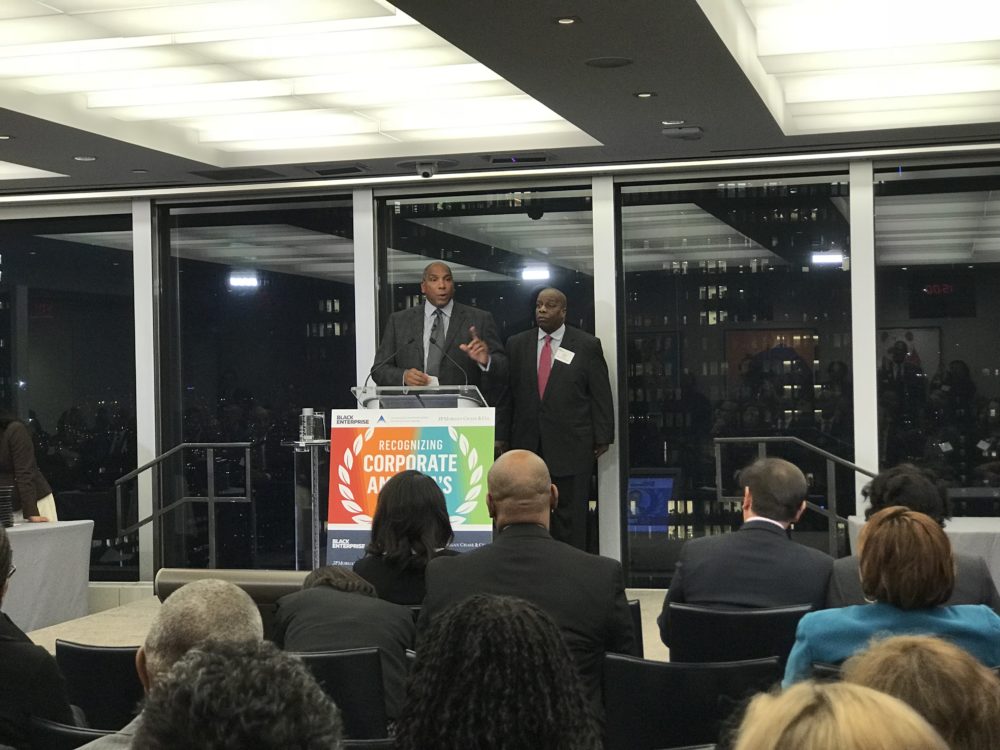 Last night, more than 225 of America’s top executives and best companies for diversity gathered at JPMorgan Chase’s world headquarters in New York City to be honored and recognized for their contributions as African American leaders in corporate America and as leading companies in diversity. The event to honor black leaders in corporate America couldn’t have come at a better time as it is Black History Month.

Over the past 30 years, BLACK ENTERPRISE has comprised and published six lists of top executives. The list started off with one CEO and then grew to 29 CEOs—and no women. Fast forward, there are now 300 top executives on the list and of that group, 112 of them are women.

Earl “Butch” Graves Jr., CEO and president of BLACK ENTERPRISE opened the night reflecting on the impact that blacks have on corporate America and with a charge to continue to diversify executive-level positions.

“At BLACK ENTERPRISE, we have always believed that diversity and inclusion, with African Americans represented across every sector and level, is critical to corporate America’s vitality, inventiveness, and competitiveness in the global marketplace. It has been consistently proven that inclusion of employees, managers, C-suite executives, corporate directors, and suppliers of diverse backgrounds, experiences, and perspectives consistently delivers superior performance and shareholder value,” said Graves Jr.

He then added, “We all know that the advancement of corporate America comes from a commitment at the top and when diverse voices are heard, we realize the creation of institutions that truly reflect our nation and all stakeholders benefit. That reality hovers over this celebration, however, there is still much work to be done related to the expansion of the leadership pipeline for people of color,” said Graves Jr.

Remarks were also given by Valerie Rainford, head of Advancing Black Leaders and Diversity Advancement Strategies and Jamie Dimon, chairman and CEO of JPMorgan Chase, which was featured on the 50 Best Companies for Diversity.

During Dimon’s remarks, he shared that in efforts to grow and diversity at JPMorgan Chase, the company will be working with high school-aged at-risk black males in inner cities to give them advice, jobs, mentoring, and training.

Other key moments included remarks from Ronald C. Parker, Executive Leadership Council president and CEO, who passed the baton to Otha “Skip” Spriggs, chief human resources officer at TIAA and who take the helm of the ELC on March 1, 2018.

Orlando Ashford, Holland America Line president, also took the stage and shared that one of his proudest moments, which he coined “mama moments,” was to go from a reader of Black Enterprise to being recognized and gracing the September/October cover of the 300 Most Powerful Executives issue of the magazine.

“I was joking with my remarks, but, they are quite serious when I talk about “mama moments”—those proud moments that you want to share with your mom, friends, and family. As a young person who had ambitions to be in business, I would read BLACK ENTERPRISE and the stories about the different individuals and what they did to be successful and I had ambitions as a young person to hopefully be successful enough at business to not only be able to be in the magazine but to be on the cover… and so to actually have one of those moments it’s one that I’m particularly proud of and happy to share it with my family and to be here with all of my peers that are on the list and see some of the great powerful executives that are represented here—and again, all people that I look up to and admire. It’s just something that I’m really proud of.”

And to future leaders, he says “be a student of others and identify your board of directors.”

Thasunda Duckett, CEO of Chase Consumer Banking, and also a member of the top executives list, shared what the night meant to her. “To be here at JPMorgan Chase where I work and to see 300 of the most powerful African Americans on the planet—it means a lot. You know you think about we’re on the shoulders of giants and when you think about our ancestors they couldn’t dream this big, but we’re here… and our job is to continue to create those opportunities for those behind us. As we climb we reach back. And it’s awesome to be here.”

Duckett will also be a panelist on the “Complete Leader” panel where she will speak about how to manage with power and influence at the 2018 Women of Power Summit in March.

“First, I’m excited to see other women that look like me and to be able to thank them and for us to be able to fellowship as sisters. In terms of being on the panel, my hope is to fulfill another element of my purpose, which is to inspire others. So, if I can leave Women of Power inspiring one more woman who looks like me I think it’s time well spent,” said Duckett.

Members from the 50 Best Companies for Diversity were also excited to be recognized for their contributions in corporate America.

“I think that one of the greatest honors of BLACK ENTERPRISE is to be recognized by your own. As we continue to struggle to diversify financial services, especially really trying to find African American talent, I think it’s amazing to have an organization that actually recognizes the struggle and the accomplishments that we’ve made,” said Williams.

While many people grow up reading BLACK ENTERPRISE, those who strived to be great businessmen and women felt like last night’s event was a full-circle moment for them as they are now featured on one of the lists.

“I remember when I was a junior person and I was like ‘I’m going to get on that list one day’ and I set that as a target. I didn’t know how I was going to get on the list or what I was going to do to get on the list but it’s such an honor. I love what Black Enterprise means and the Graves family for what they’ve done for black people who are in business and black entrepreneurs. Twenty years ago I thought, ‘I’m getting on that list,’ and now I’m on the list and it’s like wow!” said Charles Thomas, chief data and analytics officer at General Motors.

Many executives traveled from across the country to be recognized and they said that there is no other place they’d rather have been, especially since they were surrounded by their peers.

“BLACK ENTERPRISE is the premier magazine for black businesses and entrepreneurs. So, to be honored by that establishment is keen to me and it’s tops to me because I work in corporate America. I’ve gotten other accolades from other magazines that are black affiliated but when I told everyone that I was being honored by Black Enterprise they said ‘What?!’” So, from that perspective it’s off the chart and I flew in from Austin, Texas, this morning specifically for this event because it was that important and special to me. When it comes to black business, black entrepreneurs, and black professionals all you think about is BLACK ENTERPRISE,” said Angela Archon, vice president and COO, IBM Watson Health

Last night was a celebration of excellence, a charge to push past the barriers of entry for future leaders, and a moment to remember.