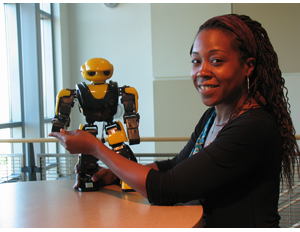 Last year, Black Enterprise interviewed Ayanna Howard, Ph.D., an award-winning robotics scientist. Howard has worked with NASA’s Jet Propulsion Lab, where she led various robotics projects. She is also a Motorola Foundation Professor in the School of Electrical and Computer Engineering at Georgia Tech’s Institute for Robotics and Intelligent Machines.

A few years ago, Howard, along with several other technology leaders and innovators, launched Zyrobotics, a startup offering technologies for accessible science, technology, engineering and math (STEM) education.

Howard and her team were at CES 2017 to showcase the company’s latest product, the Zumo Learning System.

“We gamify science and math,â€ said Howard. “We use toys, stuffed animals, stories that show different characters.” The characters are featured in several educational stories via apps and represent genders, different races, as well as children with disabilities.

Zumo is a plush, stuffed turtle children use to interact with the apps. Pressing down on Zumo’s back is one way to interact, as per Howard’s demo.

For Howard, a seasoned scientist, the goal of Zyrobotics is clear and personal to her. “We want to make STEM engaging for kids ages 3 to 6, so they’re not afraid. So that when they go into elementary and high school, it’s “Yeah, I can be an engineer, I can be a scientist,â€ she said.

Children will likely get a great STEM jump-start using Zyrobotics’ products. In addition to Howard are several other black scientists and thought leaders with the company. The company’s co-founder and COO is John V. Harding, an electrical engineering graduate from Stanford and Howard University. Harding served in several engineering leadership roles for companies including Motorola.

Zyrobotics’ CEO is J. MacCalla, Ph.D., who has three decades’ business management experience. Most recently MacCalla was the CEO of Automated Switching and Controls Inc., a communications and controls company with more than $8 million in annual contracts with city and state transit. She has degrees from Brown University, Stanford University, and a Ph.D. from the University of Southern California.