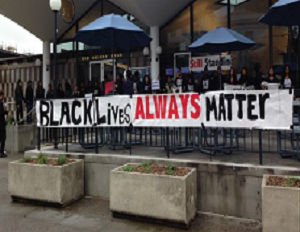 Following the death of Ferguson teen Michael Brown and the national outrage it sparked, the hashtag #BlackLivesMatter has become more than just characters taking up space in a limited 140 word count, but rather a movement that signifies a community’s cry for justice.

With protests, riots and student-led demonstrations taking place in various communities and college campuses across the nation, administrators at Dartmouth College are taking it upon themselves to bring the movement that addresses race and violence in America into the classroom.

Thanks to the geography department and African and African American studies program, students at Dartmouth will be introduced to a new course this upcoming spring term called “10 Weeks, 10 Professors: #BlackLivesMatter,” which will examine both historical and modern incidents of inequality and violence.

According to the school’s newspaper, about 15 professors from over 10 academic departments and programs will come together to teach separate sections of the class over the course of its term.

Dartmouth College is one of several college campuses whose students and faculty members have organized demonstrations and protests to show their frustration with America’s justice system following the non-indictment of Darren Wilson for the fatal shooting of unarmed Brown. Now, with a course dedicated to further examining the nation’s long-standing justice issue, the Dartmouth community is hoping that its latest academic move will show today’s generation that this issue is bigger than Ferguson.

“We hope that students will be able to understand that Ferguson is not just an event in 2014, but something that’s tethered in time to a long history and still-emerging ideas about race in the U.S. and how policing works in an age of social media and distributed surveillance,” says English professor Aimee Bahng.