The Black Men XCEL Summit Ultimate Recap: All The Highlights! 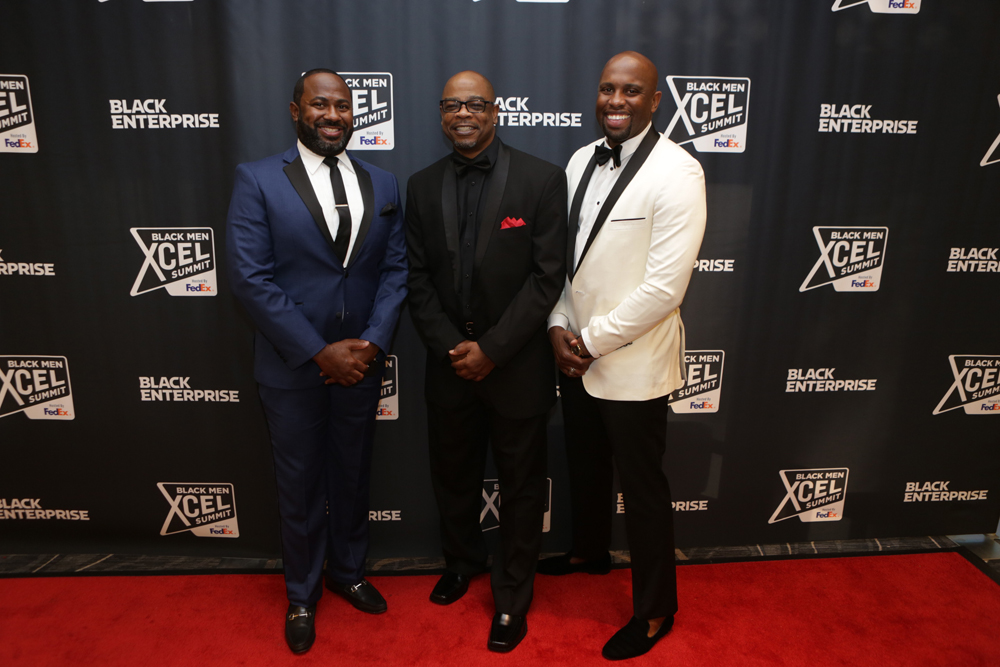 The 2017 Black Men XCEL Summit was a total success! The inaugural multiday celebration of enlightenment, empowerment, and excellence was held at the PGA National Resort & Spa in Palm Beach Gardens, Florida, Aug. 30–Sept. 3, 2017, and sponsored by FedEx. Here’s a recap of all the incredible video, images, and details of this exciting event celebrating black men.

Ending The Summit With a Bang

The last and final day of the Black Men XCEL Summit ended with a bang! Attendees enjoyed a day of fun activities, luxury spa treatments, an award ceremony celebrating the best golf players, live entertainment, and an all-white affair.

Competitive golfers arose bright and early Saturday morning for a tournament that began with a 7 a.m. shotgun start. Other golfers played at their own pace while networking on the greens during a session of Social Golf, while PGA professionals schooled beginners on the rules of the game, on-course etiquette, and skill management at the Golf Academy.

During “The Cook-Off” Challenge, teams competed to recreate a signature dish by a top chef in order to be crowned as the kitchen masters.

ESPN commentator Stephen A. Smith didn’t bite his tongue while speaking during a candid conversation with former NBA player Rod Strickland at the BMX Luncheon: Black Men in Sports: The Good, the Bad, and the Reality. Smith addressed a wide range of issues in sports and business, including the controversy surrounding Colin Kaepernick, the debate over paying student athletes, and the responsibility that athletes have as role models.

The men and women then went head-to-head in the highly anticipated Mars vs. Venus Challenge trivia game. The guys started off with a strong lead, but the ladies closed the competition with a win.

Later, attendees took advantage of an opportunity to mix, mingle, and get pampered at the spa. Meanwhile, a group of dynamic women held a forum about the importance of financial planning during the Sunset Spa session sponsored by Prudential.

After getting pampered, Russell Williamson Sr., a healthcare executive, best-selling author, and speaker, said the relaxing massage he received was the highlight of the day. “I got a 75-minute deep tissue stress relief massage. The therapist was outstanding. She was clearly a professional. She totally relieved my stress as well as forced a lot of those toxins out of my muscles,” he told Black Enterprise. “That was my favorite thing today.”

His wife, Cheryl Polote-Williamson, said the best part of BMXCEL was seeing the impact that the four-day summit had on her husband each day. “My highlight was having my husband go back to the room and tell me the amount of information that he has gleaned from the different men who have spoken and the impact that it has made on him.” She added that he was moved just “to be in the room with a powerful group of men who have gone through similar things.”

Finally, the night ended with a short ceremony to congratulate top golfers and a throwback concert featuring live performances by Guy, one of the smoothest R&B groups of the 80s and 90s.

Randy Irving, manager of Human Resources, Diversity and Inclusion at FedEx, said he was thrilled to have participated in the Summit and that he looks forward to fostering more partnerships between Black Enterprise and FedEx.

“I thought the event this week was really good. It was a good opportunity to network with black professionals. And all of the seminars and the panels that they had were very informative,” Irving told Black Enterprise. “As far as being the title sponsor, I think it was very much worth our time and effort.”

Xcelling to a New Level

Day 3 of the Black Men XCEL Summit was filled with more panels, empowering sessions, and fun.

Dozens of men and women started their day with another golf tournament on Friday, sponsored by Genesis, while rookies took the Beginner Golf Academy, where PGA professionals helped them perfect their stroke.

Others engaged in an exhilarating power walk and the Zionic Dance Fitness session, which turns reggae, calypso, soca, and Latin into a fun cardio and strength training workout.

Later that morning, Dee C. Marshall, a certified coach and author of Dear Black Man: We Love You, teamed up with BE Executive Editor-at-Large Alfred Edmond Jr. for a no-holds-barred conversation about strengthening relationships between black men and women to foster unity, growth, and love. The interactive discussion, which was presented by Prudential, also included real-time, instant polling questions with the audience.

During the BMX Luncheon: Black Men in Hollywood, actor Lamman Rucker and Jeff Friday, the president of American Black Film Festival Ventures (ABFF), explored the portrayal of black men in media and the impact that these images have on society.

The luncheon was followed by two different panels, one focused on leading and succeeding in corporate America, the other on the importance of mentorship.

Later, AT&T premiered the critically acclaimed short film, The Humanity of Connection, which illustrates the long history of AT&T’s commitment to diversity, inclusion, and its core public affairs objectives that have a major impact in the African American community. To commemorate their partnership with the Black Man XCEL Summit, AT&T commissioned a special version of the Humanity of Connection specifically focused on the mission of black men, key goals of the Summit, along with its long history of partnership with Black Enterprise.

The night ended on a high note with jokes and laughter at The BMX Comedy Jam: Black Jokes Matter!, hosted by Chris Spencer, the co-creator of BET’s Real Husbands of Hollywood. Comedians Jonathan Slocumb, Karlous Miller, and Godfrey performed before DJ Nasty led everyone to the dance floor.

The day began with an early golf tournament, sponsored by Genesis.

Hungry golfers and attendees then congregated in the PGA Ballroom for the BMX Luncheon & Awards Fireside Chat, where Erwin Raphael, the general manager at Genesis Motor America, opened the ceremony with an inspirational speech. Shawn Dove, the CEO of the Campaign for Black Male Achievement (CBMA), was presented with the inaugural BE Modern Man of the Year Award.

BE Editor-at-Large Alfred Edmond Jr. then moderated an exclusive chat with legendary actor, director, and comedian Robert Townsend, whose achievements and contributions have shattered barriers and changed the world. Townsend also shared his secrets of success in the business of entertainment.

During the How to be a Mogul: Build Your Empire session, media mogul, author, and philanthropist Louis Carr discussed what it takes to build an empire from scratch. He spoke in depth about what it takes not only to establish a world-class operation, but to keep it going.

Ed Gordon also led an empowering panel discussion about black fatherhood, titled The Fatherhood Factor: The Master Key to Black Survival and Success. During the session, Caron Butler, former NBA Player; Shawn Dove; and Kimatni D. Rawlins, the founder of Fit Fathers; opened up about their tactics for good parenting. They emphasized the need for dads to be openly vulnerable, especially with their daughters, and to be a consistent father fixture in the lives of their children.

The night ended with the BMX Good Life Social followed by a late night Brandies and Cigars networking session.

Black Enterprise kicked off the inaugural Black Men XCEL Summit on Wednesday with an evening of inspiration that recognized the extraordinary achievements of four trailblazers who have made an immense impact in their respective fields of work and the world: Hon. Congressman John Lewis, award-winning filmmaker Robert Townsend, historian Lonnie Bunch, and business leader John W. Rogers.

The night began with a warm welcome reception held at the PGA National Resort & Spa in Palm Beach Gardens, Florida. Attendees mixed and mingled while showing off their finest red-carpet attire.

They were then escorted into the PGA ballroom for the first inaugural Black Men XCEL Summit Awards, sponsored by AT&T. During his opening remarks, Black Enterprise CEO Earl “Butch” Graves Jr. emphasized the importance of uplifting black men while elevating the legacy of Black Enterprise, which has been a premier business, investing, and wealth-building resource for African Americans since 1970.

Each honoree was recognized for their achievements, influence, impact, and leadership, which has helped open doors of opportunity and present an inspiring example of success for others, especially men of color.

During his acceptance speech, John W. Rogers Jr., chairman and CEO of Ariel Investments, talked about the role Black Enterprise played in inspiring his journey in entrepreneurship.

“I can remember in those early years, as I was getting started and leaving college, getting going as a stock broker, I couldn’t wait for Black Enterprise magazine to come out every month. It was really that kind of publication that made it seem like everything was possible as a young African American in business,” said Rogers. “It was all about empowering us.”

Lonnie Bunch, the founding director of the National Museum of African American History and Culture and the author of more than a dozen books on history, race, and museum scholarship, said he accepted the award on behalf of the black men who came before him, and the “men who were called boys, but they were called boys so that we could be called congressmen, CEO, president.”

Townsend, an award-winning actor, director, and comedian, said the negative portrayal of African Americans in Hollywood inspired him to become a filmmaker. He also announced plans to bring his classic movie “The Five Heartbeats” to Broadway. He ended his speech by pressing black men to continue to fight for equality.

“With everything going on in the world, we as men of color need to fight harder than ever,” he said. “We must band together like never before, and fight harder and fight together, and understand that the work is not done.”

While sharing the stage with Earl G. Graves Sr., Lewis humbly thanked him for “seeing fit to honor a poor boy from rural Alabama.” He ended his acceptance speech telling people of color not to become complacent by the progress that has been made and to instead continue to fight for equality.

“When we see something that is not right, not fair, not justice, we have a moral obligation to speak up and to speak out. Earl, and the family of Black Enterprise, thank you for speaking up. Thank you for leading the way.”

The celebration of black men will continue until Sunday with golf tournaments, luxurious spa experiences, a Mars vs. Venus trivia competition, a celebrity chef cook-off, and live music and comedy. You can follow along on Twitter and Instagram with the hashtag #BMXCEL.