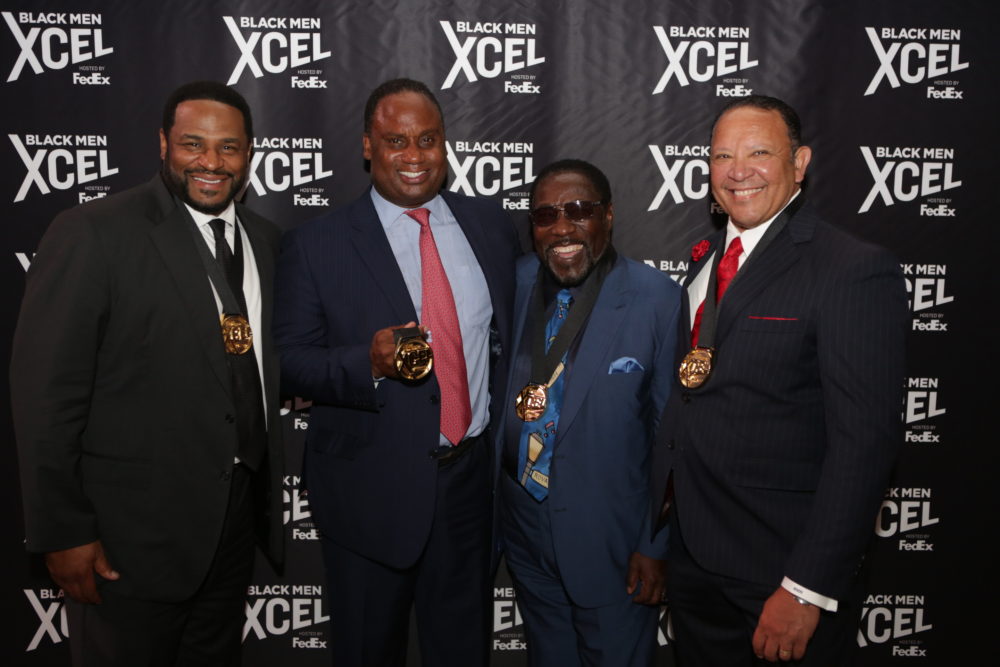 A sea of black men—and the women who love them—touched down at the JW Turnberry Miami Resort and Spa in Aventura, Florida, on Wednesday in high anticipation for Black Men XCEL, an annual four-day gathering that recognizes and empowers men of color. Each year, the summit, which is sponsored by FedEx, enriches black men with thought-provoking workshops, star-powered panels, and professional development sessions. It also features a variety of social and leisure activities, including golf tournaments, a pool party, a battle of the sexes competition, a barbershop debate, comedy, and live performances.

After checking in, attendees arrived at registration where they received badges and swag bags filled with goodies. Later that evening, they mixed and mingled at a warm welcome reception in their finest red-carpet attire. Their enthusiasm continued at the third annual Black Men XCEL Awards, which pay tribute to innovators, trailblazers, and game-changers who have risen to astonishing heights in their respective fields, sponsored by AT&T. This year’s honorees included civil rights icon Rev. Jesse Jackson, legendary soul singer Eddie Levert, National Urban League President Marc Morial, and NFL Hall of Famer and groundbreaking entrepreneur Jerome Bettis.

Emmy Award-winning broadcaster Ed Gordon opened the ceremony reflecting on the impact of The New York Times’ 1619 Project, which takes a deep dive into the history and legacy of American slavery.

“In 1619—four hundred years ago this month—20 Africans landed in Port Comfort, Virginia, brought here in chains and traded for food,” said Gordon, the master of ceremonies. “That moment would begin the journey of a people, our people, in America across four centuries marked by close to 250 years of slavery and followed by decades of legal segregation [and] discrimination,” he said. “Our journey, however, is not about being victims. It is about perseverance, self-determination, triumph, pride, succeeding against insurmountable odds.”

“For nearly five decades, Black Enterprise has been the only media outlet that has intentionally, consistently, and unapologetically shared with the world in our magazine and on our website and social media platforms the contributions of black men as corporate executives, Wall Street financiers, doctors, attorneys, engineers, and, of course, entrepreneurs.” Graves also described Black Men XCEL as a franchise that serves to further the legacy of his father, Earl Graves Sr., who launched the print magazine in 1970.

Shortly thereafter, Corey Anthony, senior vice president, Human Resources and chief diversity officer at AT&T, delighted the audience with a story of how Levert, the lead singer of The O’Jays, impacted his life and, ultimately, helped facilitate his marriage.

Tony Waller, senior director, Corporate Affairs Constituent Relations for Walmart, presented the first award of the night to Morial, who expressed the need to “bust the myth” of black men fostered by stereotypes and negative imagery.

After Bettis and Levert received their respective honors, activist Jonathan Jackson accepted the award on behalf of his father, Rev. Jackson, sharing powerful words of inspiration.

The excitement at the 3rd annual Black Men XCEL summit continued on Thursday with a day packed with empowering panels, workshops, and fun. Attendees hit the greens early that morning for tournament golf with a shotgun start at 8 a.m. Others held one-on-one sessions with executive leadership coaches, while some received complimentary haircuts at the Spark Studio Grooming Suite courtesy of Walmart.

During lunch, guests heard from a panel of fintech experts about the opportunities in the technology and financial service sectors, two of the hottest and highest-paying industries in corporate America. The panel of HR and diversity specialists engaged in an insightful, forward-looking discussion about collaborative, results-oriented strategies for black talent.

That panel was followed by a fireside chat between Graves Jr. and NBA legend and entrepreneur Isiah Thomas, who opened up about his humble beginnings growing up on Chicago’s West Side and the inspiration he received from his mother, who worked as an activist with the Black Panther Party. The 12-time NBA All-Star also spoke about his two biggest disappointments in sports: losing a basketball match in high school and when he notoriously “threw the ball away to Larry Bird” in the 1987 East Finals.

The NBA Hall of Famer went on to talk about his business ventures, including his partnership with Thomas Cheurlin, owner of the award-winning Cheurlin Champagne. This makes Thomas one of the few—if not the only—African American to own and import champagne in the world.

Later, Gordon led a panel discussion titled “Debunking The Myth of the Absent Black Father” where audience members were encouraged to talk about the long-lasting effects of growing up without an active dad in their lives.

The last panel of the day focused on the controversial “Rooney Rule” and the underrepresentation of black men in coaching, management, and executive leadership positions in the sports industry. The panelist—former NBA player Anfernee “Penny” Hardaway, former NFL player Darius Butler, former NBA player-turned-TV-analyst Greg Anthony, and moderator Keith Clinkscales, founder of The Shadow League, addressed the opportunities and obstacles for black men aspiring to these positions.

On Friday, guests began the day with another round of golf, this time at the Fort Lauderdale Country Club. Meanwhile, rookies received coaching on how to perfect their stroke from golf experts at the JW Turnberry Resort and Spa.

Later that morning, a panel of experts shared lessons on leadership and what it takes to win over your colleagues and superiors in order to advance in your career. That session was followed by a personal branding and style coaching session facilitated by international speaker and award-winning author Dr. Alex Ellis. A paint and sip session was also held for attendees who opted to explore their creative talents while sipping wine spritzers.

During lunch, Dr. Janet Taylor led a conversation about the traumas that black men endure due to systemic inequalities in criminal justice, education, and mental healthcare, featuring David C. Banks, the founding principal of The Eagle Academy for Young Men, and Marcus Bullock, a formerly incarcerated person-turned-techpreneur. Together, they unpacked the cumulative psychological effects that black boys and men face in addition to the work that each panelist is doing to combat these granular issues.

That was followed by a panel about conscious black men in entertainment, featuring comedian Roy Wood Jr., comedian and actor Flex Alexander, and moderator Justin Key, an actor, author, and entrepreneur.

The highly-anticipated BMX Barbershop Debate, sponsored by Walmart, was also held that afternoon at which comedians Capone, Mark Viera, and Shuler King engaged in spirited conversations about the best NBA player, professional boxer, and more. Luckily, things later cooled off at the poolside mixer, where guests enjoyed drinks and the sounds provided by DJ Nasty.

The night ended with an exclusive screening sponsored by Prudential of Legacy Lives On, a documentary about wealth building through the lens of three African American women. That was followed by a fireside chat between actor and comedian Affion Crockett and Prudential’s Delvin Joyce, a financial planner.

Once again, golf pros were invited to participate in a golf tournament with a 7 a.m. shotgun start at the beginning of the day. Meanwhile, PGA professionals taught the newbies about golf etiquette, games rules, and basic course management skills. Later on, celebrity golf instructor Rodney Green held a comprehensive and strategic seminar focusing on the value of golf to further one’s professional and business goals.

Prudential sponsored a no-holds-barred panel discussion about love and money and all that comes into play when couples become financially intimate. “As soon as you think you want to get serious about someone, make a meeting with a financial planner,” advised panelist Alfred Edmond Jr., SVP/Executive Editor-at-Large at BLACK ENTERPRISE. “If you go to that meeting, and you don’t walk out on the same page, you should probably just end it right there.”

At lunch, brothers peeled back the layers of toxic masculinity and talked about being vulnerable during a luncheon session titled “Cry Like A Man.”

On Saturday afternoon, guests enjoyed more fun at the popular Mars vs. Venus battle of the sexes trivia game, hosted by actor and comedian Chris Spencer and powered by Cricket Wireless. The competition was fierce as a panel of seven women and men squared off by answering a variety of questions about sports, pop culture, and sex in front of a gender-divided audience. Both sides enthusiastically cheered and danced whenever they answered a question correctly. However, the women walked away with bragging rights and a second-year win.

A select group of attendees then enjoyed a wine tasting session, sponsored by Cricket Wireless. To end the 2019 Black Men XCEL Summit, FedEx sponsored a dinner and live concert, featuring 112 and Jagged Edge.