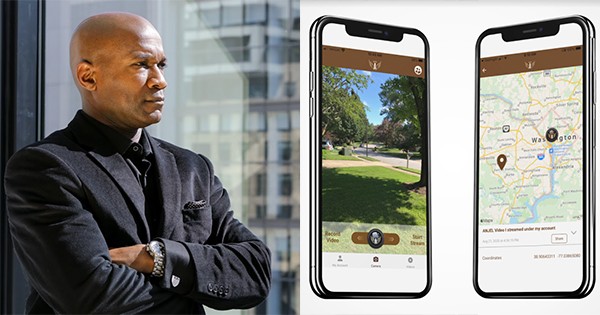 Meet James A. Samuel, Jr., a Black veteran who has launched a new app called ANJEL Tech that turns any smartphone into the world’s most powerful bodycam during confrontations with the police. James said that he became tired of raising kids in a world that forces them to understand they’re unsafe in their skin before they even learn their ABCs.

In recent weeks, the world has been watching Derek Chauvin on trial for murder charges for the killing of George Floyd; seeing news about 2nd Lt. Caron Nazario, who is Black and Latino, getting pulled over by two police officers in Windsor, Virginia; and the killing of Daunte Wright at the hands of police. And these only are a few of too many stories of Black people being racially profiled and fearing for safety when being pulled over by police.

ANJEL Tech is an innovative solution to increase safety and peace of mind in the Black community. The app is secure, mobile, and cloud-based. James says that he created it because he’s passionate about preventing your loved ones from becoming another painful statistic. “Body cams can’t just be for police,” he says. “So I created ANJEL Tech to enable a person’s phone to act as a body cam and a lifeline to loved ones to increase safety and accountability.”

He continues, “When George Floyd was being asphyxiated, he was calling out verbally for his mother. When Lt. Caron Nazario was pulled over, he recorded the incident on his phone, but imagine if they both had been able to instantly and automatically alert their loved ones to come. Imagine if the footage of any these horrific incident had been controlled by the victim himself. That’s what ANJEL Tech does. I’ve created an app that reduces the emotional, financial, and physical toll of racial profiling.”

When activated, the ANJEL Tech app sends a live stream of the incident as well as alerts with GPS directions to the person’s location so that loved ones can be there the instant they’re needed to help. The app is also discrete so that the person in need can quietly ask for help without an aggressor noticing. It also automatically saves the audio and footage that can be utilized later to demand accountability. Even more, the video evidence is kept secure and accessible unlike the footage from police cams that can easily be edited or deleted.

“I know too many Black moms who have received a phone call that turned their world upside down in an instant. And too many others who’ve had to live with the possibility of it happening every day since the first time their kid left for school,” James said. “Watching George Floyd asphyxiated on that asphalt scared me, awakened me, and motivated me to change the world.”