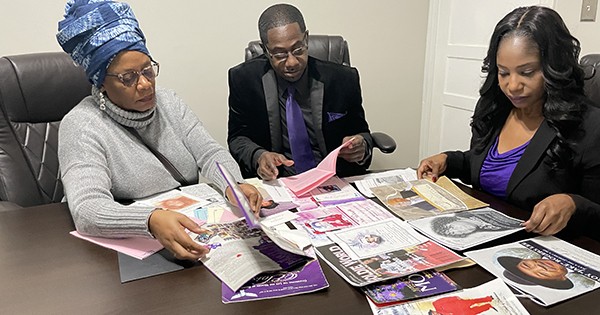 Dr. Valarie Richardson, Earl Richardson, Jr., and Alex Richardson, the owners of Richard Funeral Home are working with Dr. Antoinette Harrell, a respected historian and genealogist, to help preserve Black history by means of their collection of funeral programs and obituaries.

Based in Amite, La., the funeral home contacted Dr. Antoinette Harrell regarding their collection of funeral programs and Harrell provided her genealogical and historical preservation expertise.

Later, the decision was made to donate the collection for preservation, and Dr. Harrell picked up the collection of funeral programs from Eddie Brazil, a staff member.

The importance of funeral programs and obituaries

Funeral programs contain a wealth of genealogical information. Historians and genealogists are aware of the significance of funeral programs. Among the details collected about the deceased are their date of birth, their date of death, their parents’ names, their occupation, where they attended school, and if they were married, the name of their spouse and children. The maiden name of married women. Certain programs do, however, provide a wealth of historical information.

Black obituaries were rarely published by newspapers. The families of the deceased wanted to create a written tribute for their loved ones. This was the only way they could make the information publicly available and honor their deceased loved one.

More than five decades in the business

For over fifty years, the Richardson Funeral Home has been a family-owned and operated enterprise. In 1959, Thomas Alexander Richardson and Melissa Wheat Richardson, opened their first funeral home in Amite. The couple had ten children, and several of them followed in their father’s footsteps. Harrell discovered that Thomas worked at Gullet’s Cotton Gin in Amite, La., before becoming a business owner. He was also a farmer and worked with the WPA. A person with only a third-grade education worked his way up from picking cotton to owning and operating his own business that operates in two locations in Louisiana 62 years later.

Harrell noted that some of the funeral programs revealed some important historical information that would not have been known without the programs. Numerous programs were presented. One of the programs was for Shirley Cross Temple, who graduated from Tuskegee University and referred to the time she served George Washington Carver.

Another funeral program of Robert Parker who was known for his 1966 song “Barefootin!” He also performed alongside many other New Orleans musicians such as Fat Domino and Irma Thomas. He was also inducted into the Louisiana Music Hall of Fame in 2007. The funeral program of Cain Wall, Sr. was featured in People Magazine “The Last Slaves of Mississippi” and featured on Nightline News.

In other programs, some of the local history and the contributions that the deceased made to Florida Parishes are highlighted. A majority of the black school’s history was destroyed during integration. A number of one-room schools and churches were mentioned. The programs mentioned schools such as the Amite Color School, Ponchatoula Color School, and Harris Color School.

Today’s funeral programs are often illustrated with pictures of the deceased and their families. These programs were distributed to many people who attended the funeral. It is our greatest honor to announce that Richardson Funeral Home in Amite has become the first funeral home in Louisiana to preserve its rich informational programs.

As a result, the East Baton Rouge Library Genealogy and Special Collections Department approached Dr. Harrell to discuss scanning and digitizing the collection for online access. As an added bonus, Dr. Harrell makes many of the programs available on her blogpost “Nurturing Our Roots Blogpost”. In total, Richardson Funeral Home, Inc., has preserved over a thousand funeral programs.