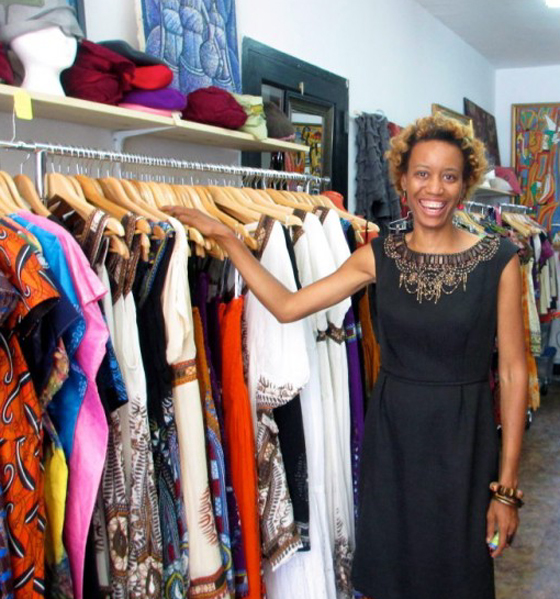 After his “shit hole” remarks denigrating immigrants in early January, members of the Democratic Black Caucus responded, in part, by donning traditional African kente cloths at President Donald Trump’s State of the Union address. That was on Jan. 31.The images of the black politicians were peppered all over social media. Little did some sellers of African fabric around the country know what was about to hit them less than a month later when Marvel Studio’s blockbuster movie Black Panther premiered on Feb. 16—sending demand for African fabrics through the roof.

Atim Oton, who owns and runs Calabar Imports in New York, said she prepped for demand ahead of the Black Panther film premiere.

“Yes, we at Calabar Imports planned ahead as we were expecting a spike in sales from our current customers and also new customers that we would gain during that period in our three locations,” Oton told Black Enterprise.

She said she ordered several types of dashikis, clothing, and jewelry ahead of time.

“We also made headwraps, headbands, and scarves, which were bought in middle January, when sales really began,” Oton said. “As we represent several designers—we brought out more of their clothing earlier in January, something we typically bring out in February.”

Oton said the release of the movie has had a trickle-down effect on all of her businesses.

At her Bed-Stuy location on Tompkins Avenue and Madison Street in Brooklyn, she said sales were up 60%.

“We had more foot traffic—about 60% more than the week before the film’s release and sales were hitting numbers as high as 140 % in each of the stores,” Oton said.

Her other locations also saw increase in sales. Sales went up 40% at her Crown Heights location in Brooklyn, and 40% in her Harlem location on 134th Street and Frederick Douglass Boulevard.

“We also did a social media campaign on Instagram and Facebook around clothing options to wear for the movie, ran a few slideshows, and actually compiled looks and brought in fabric, which we don’t sell as much anymore,” Oton said.

Ebby Ihionu, who opened Elegance African Fashions in Boston 11 years ago, said customers have been flocking to the shop that sells African clothes and accessories.

Ihionu, a fashion designer by trade, has been running the small shop underneath her home in Dorchester for over a decade and she said this winter season has been her busiest yet. She said she has been opening her shop early and staying late ever since the premiere of the movie.

“We have Nigeria, we have Tanzania, we have Ghanaian, Cameroonian, we have just Liberia, everywhere,” Ihionu said.

In Barbados, cloth materials seem to fly off the rolls according to Suzette Layne, store manager at Swan Street in Bridgetown, but that this year has been unusual.

Demand for fabric has become so great that Abed is missing orders from customers.

“We’ve tried. We keep trying, but for some reason we sometimes fall short on the quota based on the popularity of the fabric, and we would have been selling our African fabric throughout the year. Normally, we would only bring it out around this time but we have realized that there is a demand for it constantly. The demand may not be great during the year, but all during the year, African fabric has been selling.

In Philadelphia, Ngozi Oguekwe barely opened up shop for the day when her first customers arrived.

In the days leading to the official release of Black Panther nationwide on Feb. 16, Oguekwe told the Philadelphia Inquirer that her store was so packed “you couldn’t walk through here.”

“I had the mother, the father, and the children all wanting me to make outfits for them to go see the movie. I was here until 8:00  one night,” Oguekwe said.

Qaasim Rose, 19, a recent high school graduate who visited Oguekwe’s shop said he needed the attire to “get in the right mood” for the movie. He purchased a dashiki in vivid red print to see the movie with his father and three of his four brothers.

So much of Oguekwe’s inventory was purchased, leaving naked walls, that she had to remove some clothes from the floor racks to replace them.

In Brooklyn, Oton said she has been capitalizing on the buzz.

At all her stores, Oton threw several events from trunk shows to pop-up shops and food events. She had all her staff well versed in what kind of style would fit the different kinds of people coming into the store.

“At our height of sales, people came in looking to dress like Shaka Zulu and Eddie Murphy in Coming to America,” Oton said. “We were able to accommodate them as I had brought out spears and shields from our storage.”