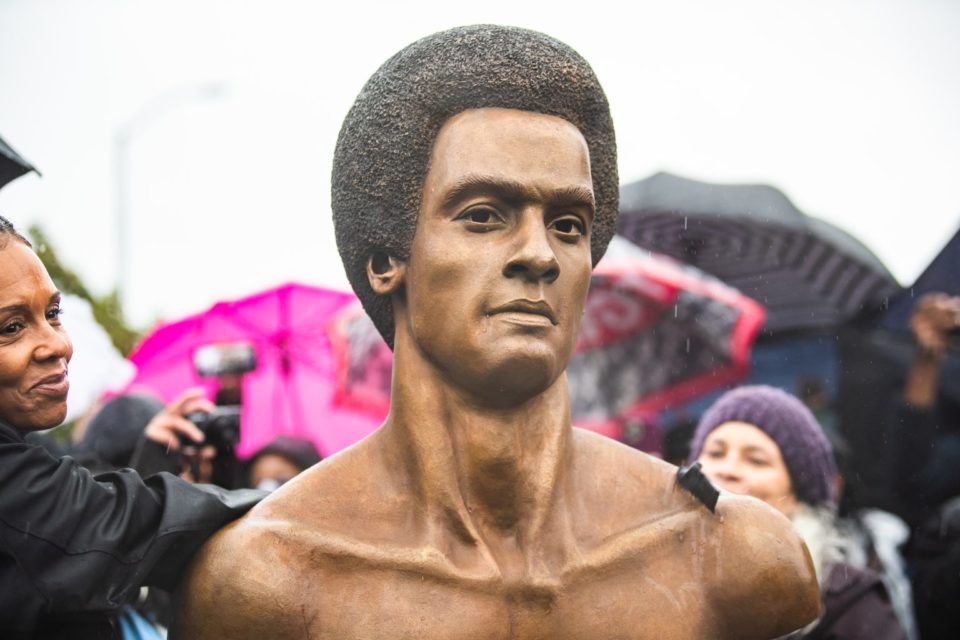 Over the weekend, the Black Panther Party unveiled a bronze bust of Huey P. Newton in celebration of both his life and the Party’s 55th anniversary.

The bust was crafted at the Artworks Foundry in Berkley over the summer, under the guidance and supervision of Newton’s widow Fredrika. It will now live at the intersection of Dr. Huey P. Newton Way and Mandela Parkway in Oakland, becoming the first public monument honoring the Panthers in the city where the Party was founded, reports the Associated Press.

The statue’s location is not far from the spot where Newton was killed by a drug dealer on Aug. 22, 1989, after he had fallen into the throes of drug and alcohol addiction.

By the time he died, the Party had officially been defunct for seven years after years of police surveillance, declined membership, and in-fighting. The Panthers’ latter years were also marred by allegations that Newton killed a sex worker and assaulted his tailor, then orchestrated attacks against witnesses who could have testified against him in both cases.

Ultimately, he disbanded the Party after being charged with embezzling $600,000 in federal aid money earmarked for the Panthers’ Oakland Community School.

Still, Newton remains a generally heralded figure in the Black community. After establishing the Black Panther Party alongside Chairman Bobby Seale in response to their frustration that the civil rights movement of the South largely ignored the struggles of Black people elsewhere in the United States. While most associate the Panthers with their belief in armed self-defense as a way to combat police brutality, the Party’s Ten-Point program was about much more than that.

At its height, the Black Panther Party’s Survival Programs, which included a free breakfast program and free sickle cell testing, had been adapted in over 70 cities.

“I would like for people to see him as a total human being,” she says. “That he wasn’t just an iconic figure in a wicker chair. This was a man with vulnerabilities, with feelings, with insecurities, with frailties, just like anybody.”