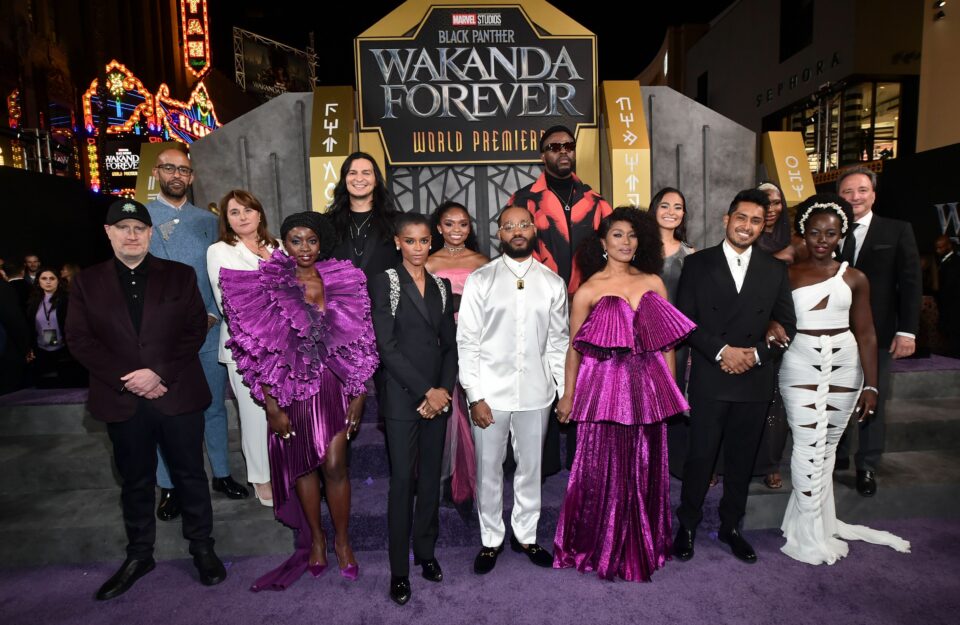 The team behind "Black Panther: Wakanda Forever" at the film's world premiere at the El Capitan Theatre in Hollywood, California, on October 26, 2022. (Photo by Alberto E. Rodriguez/Getty Images for Disney)

Black Panther fans have waited four years for a return to Wakanda since the film debuted in 2018, and the new Disney and Marvel Studios production spiked box office sales over the weekend.

According to CNBC, Black Panther: Wakanda Forever, earned an estimated $180 million during its domestic debut, the highest November opening of all time. Critics applauded the film, directed by Ryan Coogler, for its futuristic cinema and salute to the late Chadwick Boseman.

″Wakanda Forever is living up to expectations as not just an important tentpole blockbuster for Disney and movie theaters, but also a memorial to Chadwick Boseman that fans are sharing and experiencing together,” said Shawn Robbins, chief analyst at BoxOffice.com.

The global celebration is now the #1 movie in the world.

“After weeks of a post-summer slowdown, Wakanda Forever delivered a strong reminder of the power of an epic Marvel movie to deliver blockbuster-style revenue to movie theaters,” said Paul Dergarabedian, senior media analyst at Comscore.

The outlet reported that African American and Hispanic viewers fueled ticket sales for the film with a predominately Black cast featuring several Hispanic actors. Estimates show 36% of tickets were purchased by African Americans and 13% from Hispanics. Additionally, the film represented 94% of all foot traffic at theaters domestically.

“Positive reception should help propel this film in the weeks ahead as fans embrace the heartfelt continuation of the Black Panther story and the MCU moves forward into its next phase,” said Robbins of BoxOffice.com.

Variety reported that despite shooting during COVID and an injury to Letitia Wright that suspended the filming, Wakanda Forever holds the spot as the second-biggest domestic debut of the year behind the $187.4 million launch of Doctor Strange in the Multiverse of Madness. It is also the third best pandemic era bow, behind Doctor Strange and Spider-Man: No Way Home.

According to The Economic Times, ticket sales form 50 territories overseas were estimated at $150 million, scoring the film a worldwide total of $330 million.

Production for Black Panther: Wakanda Forever was estimated to be worth $250 million.