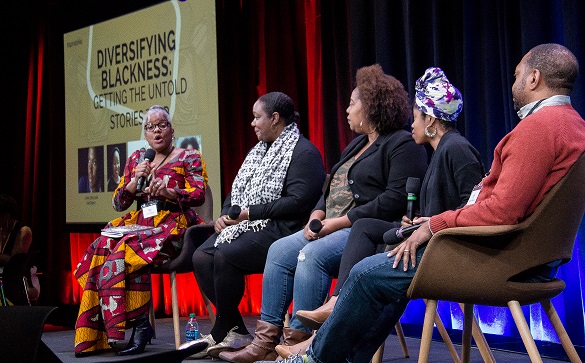 While the cultural impact and box-office success of Black Panther has proven that it is in movie studios’ best financial interests to fund and produce diverse films with diverse casts and perspectives, the general consensus at Black Public Media’s first Story Summit was that black, independent content creators still have a long way to go in getting their projects funded.

Within three months of DeShuna Spencer launching KweliTV in 2015, the interactive platform that exclusively steams independent films and web series curated from the African diaspora received nearly a thousand subscribers and 7,800 registered users. Since then, Spencer has attended, pitched, and won numerous competitions over the past three years but the venture capital she’d been looking to raise still hasn’t materialized. One of the white venture capitalists that had agreed to meet with her even pressed her on the need for her platform.

Spencer wasn’t surprised at all. Growing up in Memphis, Tennessee, as a young girl she had been told she didn’t look like she was from Africa. As a teenager, she had seen ads on television asking for donations for black African children who looked like they’d been instructed to gaze into the camera with their suffering eyes and almost always had flies around them. If she had seen the ads, she was sure her schoolmates had seen them too, which is why she takes her mission of diversifying black stories very seriously.

Spencer, who is bullish about her work, said content creators need to show something different: “Keep pushing and when it’s [the film project’s] done, we’ll get it on KweliTV.”

“I do take it personally when it comes to telling and curating our stories,””Spencer told a packed room at the Google offices in New York. City

The ultimate question posed to the panelists on Diversifying Blackness at Black Public Media’’ first Story Summit: how does the black community grow its selection of black stories about black people that studios are willing to take on?

“The root of making influence is about having power. You really have to have full control. When you’re running your own show, you get to bring in your own people,” said Tilghman, who joined NBC’s critically acclaimed show This Is Us as a writer in 2017.

To go from an independent filmmaker to being funded, Tilghman, who has contributed to numerous film and television projects, said investors also need to find smart people whose projects have already been funded by organizations like Black Public Media (BPM).

Founded in 1979 to encourage the development of films and television programs about the black experience, Black Public Media has provided seed money for filmmakers such as Spike Lee, Julie Dash, Stanley Nelson, Shola Lynch, and Byron Hurt early on in their careers.

Angela Tucker, a film producer and director in New Orleans, whose 2017 dramedy Intersection was funded by BPM, said creators just need to tell their own stories truthfully. “There are stories I’d like to tell that I won’t be able to, because of funding,” she said. Tucker, whose projects had never been funded as an individual said it not only helps filmmakers make their dreams come true, but that it also gives them confidence—to create more.