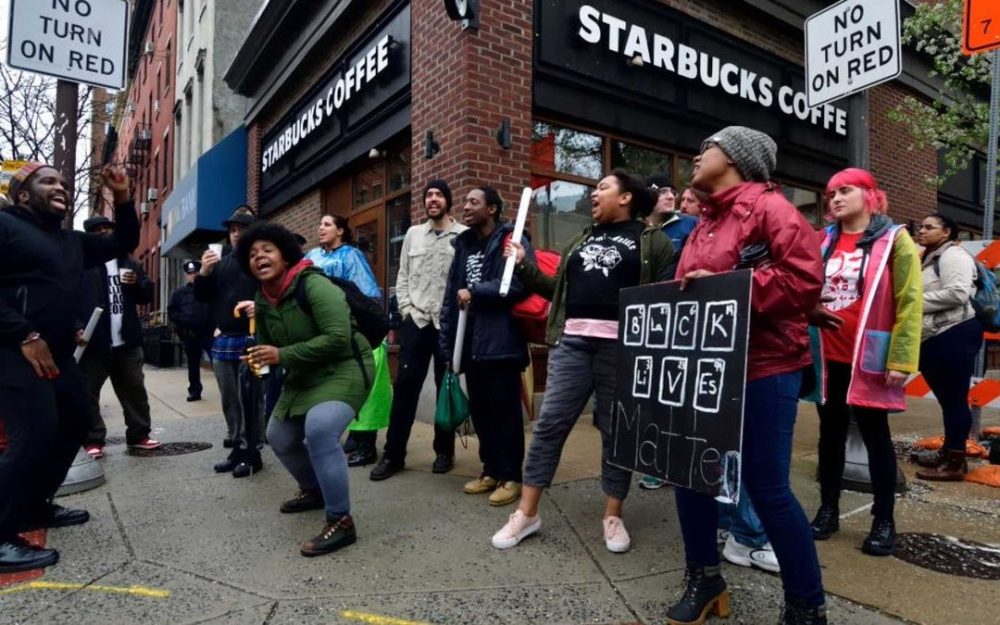 Protesters in front of the local Starbucks in Philadelphia where two 23-year old black entrepreneurs were arrested. (Photo: twitter.com/benshapiro)

Just in case you’ve missed some of the black small business and other news stories we published last week, we’ve got you covered:

After more than two weeks of emotional testimony from his accusers, Bill Cosby, in a win for the #MeToo movement, was found guilty on three counts of aggravated indecent assault.

After a rough 2017 that was riddled with scandals and controversy that saw its Chief Executive Travis Kalanick ousted, Uber committed to diversifying its workforce. The company took proactive steps by partnering with Girls Who Code, BUILD, Technovation, Code.org, and SMASH. It even hired Bozoma Saint John as its chief brand officer. When the company released its second annual diversity report last week, however, its internal data suggests that little progress had been made with no black or African American in a leadership position.

Bruce Jackson joined Microsoft at a pivotal time. Bill Gates had just stepped down as chief executive of the company and Steve Baller, an exuberant and energetic senior was taking the reins. Some 18 years later, Jackson, who joined Microsoft as corporate counsel for the Digital Media Division, will get a new title, he will manage a team of 20 and support an $18B business.

It has now been a couple of weeks since Starbucks has come under scrutiny about the racial profiling case of Rashon Nelson and Donte Robinson. Both 23-year old entrepreneurs who were handcuffed and escorted out of a local Philadelphia location simply because they hadn’t purchased anything. While national uproar has prompted Starbucks to publicly, and privately apologize to the two black men, CEO Kevin Johnson said his company may actually profit from its misstep.

If you’ve watched enough of television over the past couple of years, you’re probably curious about what your Ancestry.com tests will give. So was Andrew M. and his brother; they sent in a saliva sample. They found out the majority of their DNA was from Africa, some from Europe and surprisingly Polynesia. When Andrew, who has now launched an online petition, zoomed in on their African lineage, he said he was surprised at how Ancenstry.com described the arrival of slaves in the United States.

“Ancestry.com suggested that our ancestors had arrived in the South during the “migration” of the past few hundred years,” Andrew wrote in the petition.

Growing up in Woodruff, a town nestled in Spartanburg County, South Carolina, with a population of less than 5,000, Tory Dandy could have never envisioned that he’d one day be negotiating contracts and representing some of the top players in the National Football League.