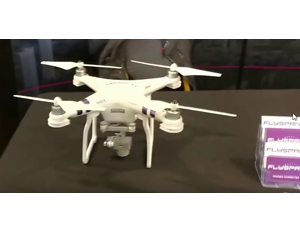 A highlight feature of this year’s Black Enterprise TechConneXt Tech Summit, held last weekend in Burlingame, C.A., was the Innovation Lab. SeveralÂ companies, including FedEx and black-owned tech startups, demonstrated a wide range of products and services. Here are a few of those founders in action:

Christoval, an engineer with a Bachelor of Science in Aerospace Science Engineering from Tuskegee University, launched the company in 2013 along with another engineer, Vinny Capobianco.

The CEO of Amp.it, Derrick N. Ashong, was on hand in the Innovation Lab to demonstrate the power of his company’s software solution for building an engaged community around content.

Amp.it is a mobile optimized web platform. It has an embeddable video player that lets users log in directly from the player via Facebook. Users receive points when they consume or share content. As they do so, they rise through levels–from “Fanâ€ to “Tastemakerâ€–receiving recognition and rewards from content producers, brands, and other creators competing for their attention.

The company’s first client was The World Cup of Hip Hop: Take Back the Mic–a two-time Emmy finalist in Original Interactive Programming.

Imo Udom, the founder of WePow, showed the future of the work interview and hiring process. WePow is a platform that lets companies create pre-recorded or live interviews with perspective hires. Businesses using WePow include Adidas, Lenovo, and Box. With WePow, Udom says that businesses “regain time, reduce costs, and recruit precisely.â€

WePow is located in the same town as Apple, Cupertino and embodies Silicon Valley innovation, with its array of services, including company branded interviews and mobile apps.