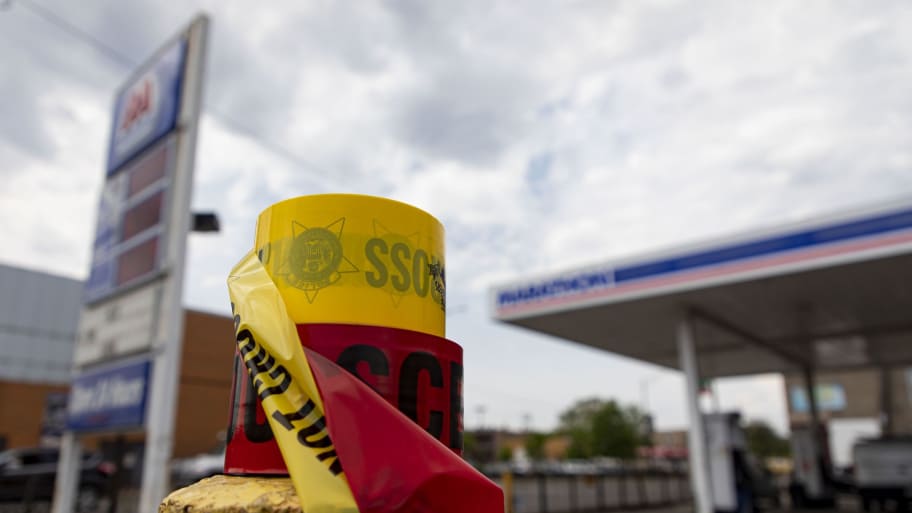 Surveillance footage captures a Chicago Police officer shooting a 13-year-old Black teenage boy while raising his hands in the air, according to the Independent.

A dozen officers engaged in a foot pursuit of the unarmed seventh-grader, known as A.G., on May 18, when he was running away from a suspected stolen vehicle, the Independent reports.

The video shows the teen running off the sidewalk and into the parking lot of a gas station, raising his hands and turning to his right side when police gunned him down in his back. A.G. then fell on the ground near a gas pump, according to the Daily Beast.

The footage then shows the two officers at the scene dragging the teen to a different location by his legs and clothing. Chicago Police Superintendent David Brown defended his officers’ action saying they hauled the teen away from the gas pump to avoid a possible explosion after the shooting, according to the Daily Beast.

Soon after, another cop barreled his vehicle into the gas station and crashed into a sign, and approximately 20 officers diverted their attention to their colleague instead of rendering aid to the young boy.

The teen’s family has filed a lawsuit against the unidentified police officer and the City of Chicago, claiming that A.G. obeyed the officer’s commands before being shot, and now the teen “has been permanently and catastrophically injured,” the Daily Beast reports.

“CPD officers did not render immediate aide to A.G., but instead callously dragged him across the pavement and then turned their attention to an uninjured officer who crashed into a sign at the gas station while arriving on scene,” states the complaint.

One witness said to ABC7 that the teen followed the officers’ instructions, the Daily Beast reports.

The Civilian Office of Police Accountability (COPA), the agency that investigates police shootings, verified no weapon was found at the scene, according to the Independent.

A.G., who was an active child, faces the grim reality that he may not walk again due to his spinal injury where a bullet is jammed in his back and lacking movement in his legs, his family reports, according to the Independent.

“You got yet another Black young person shot in the back in a city that is under a federal consent decree, in a city that has not enacted a new foot pursuit policy that preserves and respects the sanctity of life.”

Police claim that A.G. was a passenger in a silver Honda Accord during a carjacking days before; however, the driver accused in the carjacking nor the individual driving A.G. were arrested, according to the Daily Beast.