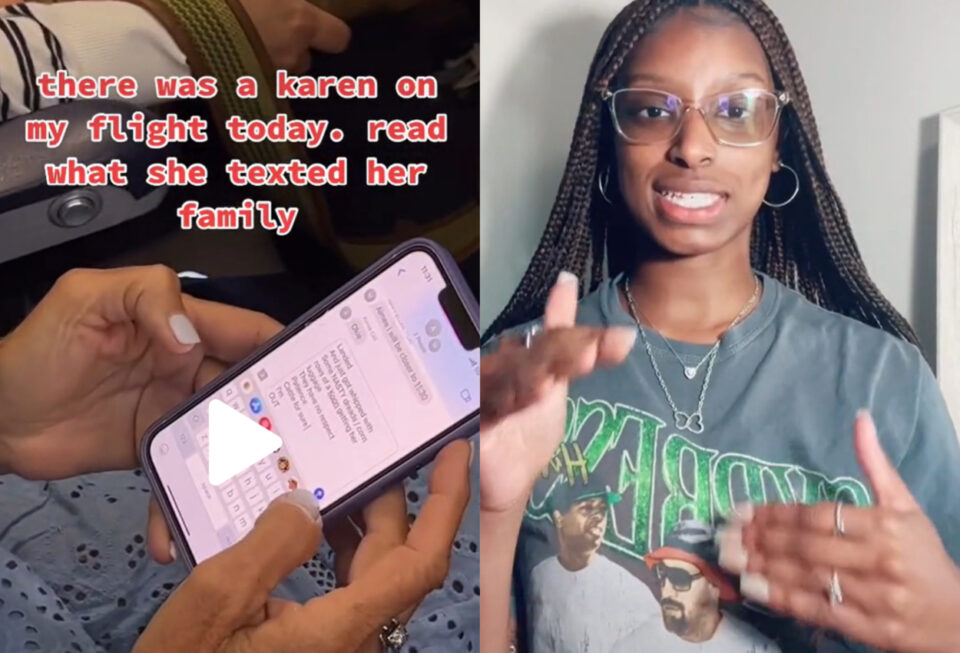 A Black TikTok user put a bigoted white woman on blast by filming the racist text she sent out after being mistakenly touched by the woman’s braids.

TikTok user Riah Elese took to the social platform to post a short video airing out the “Karen” on her flight. She caught her sending a racist text message about being touched by Elese’s “nasty dreads/corn rows.”

“There was a Karen on my flight today, read what she texted her family,” Elese wrote in the caption.

The video showed a zoom-in on a white woman typing away as she described the “COON” who swiped her with her braids while exiting the plane.

In a follow-up video, Elese explained that she sat across the aisle from the woman during the flight and recorded the video as they were landing. During the de-boarding process, Elese says she accidentally swiped the white woman with her braids while reaching to grab her bag.

She says the white woman told her, “Don’t worry about it,” but proceeded to start typing away on her cellphone. When Elese glanced over at the woman, she noticed the discriminatory text she was sending to her family.

“The message basically said that she just got hit twice with the dreads/cornrows of a COON — COON in all caps,” Elese explained.

“She proceeded to call me disrespectful.”

Elese says she never confronted the woman about the racist text despite the woman accusing her of being “in her space.” However, the now-viral TikTok changed all that.

Elese noted those who accused her of “violating” the white woman’s privacy by recording her text. But there are more who think the invasion of privacy was justified.