The 9 Blackest Moments at the Met Gala [Video + Photos] 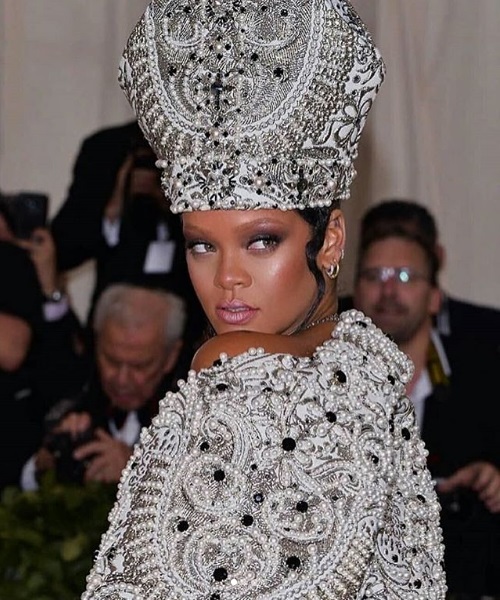 Hollywood darlings, fashion powerhouses, and elite socialites convened in New York City Monday night for the annual Met Gala, an exclusive fundraiser to benefit the Metropolitan Museum of Art’s Costume Institute. Attendees adorned angelic looks and costumes as according to the theme: “Heavenly Bodies: Fashion and the Catholic Imagination.” However, by no surprise, a number of black stars took their creativity to the next level, while others refused to be anything less than unapologetically black.

Here are nine of the blackest moments that occurred at the 2018 Met Gala.

HBO star Issa Rae sported cornbraids and beads styled by celebrity hairstylist and natural hair expert Felicia Leatherwood. In a post on Instagram, Leatherwood revealed that the style paid tribute to the motherland as well as Rae’s African roots. “I tried blending her heritage of West African with the angelic theme of the Gala. If you look closely at the beads, you will see the continent of Africa,” she wrote.

When Solange Showed Up in a Du-Rag

Solange Knowles accessorized her Iris van Herpen dress and latex thigh-high boots with a du-rag and a headdress made of blonde hair. The “Cranes In The Sky” singer said her look was inspired by various saints and her own interpretation of God.

“My inspiration was Black Madonna, Saint Heron…all of the Black and African saints,” she told Vogue, adding, “and I’m really excited because my du-rag says ‘my god wears a du-rag.'”

The Stars of Black Panther Reminded Us That It’s Wakanda Forever, Wherever

When John Boyega and Michael B. Jordan Led a “Met Takeover”

Star Wars actor John Boyega and Black Panther actor Michael B. Jordan shared a moment with several other black Hollywood elites that they proclaimed as the “Met takeover.”

Because only a queen could pull off a look inspired by the Pope: Rihanna wore a papal crown, minidress, and a cape designed by Maison Margiela. The pop superstar also co-hosted the fashion gala alongside Amal Clooney, Donatella Versace, Anna Wintour, and Stephen and Christine Schwarzman.

Leave it up to black people to sneak in subtle shade and side-eye-worthy remarks. Social media users reacted when Nicki Minaj referenced herself as “the bad guy” during a live interview, while many interpreted her comments as a dig toward Cardi B. and Migos, who Minaj has accused of villainizing her.

Rapper Tauheed “2 Chainz” Epps proposed to his longtime girlfriend Kesha Ward on the red carpet and she said yes. The couple are the parents of three children.

When The Turn-Up Got Real

Black Panther star Letitia Wright captured all the black excellence that was in the room in this candid moment.