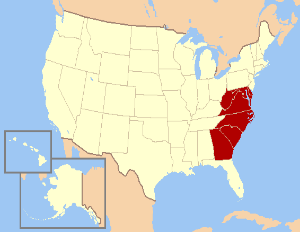 In 2000, 1.3% of blacks earning $100,000 or more lived in Memphis, Tennessee.Â  Today that number has risen to 3.4%.Â  Nearly 2% of blacks in this same income group lived in Atlanta when the new millennium began. Today, that number has nearly doubled. The number of blacks living in Aiken, South Carolina, who earned more than $100,000 a year was not even measurable in 2000. Today, nearly 3% of that demographic call Aiken home. 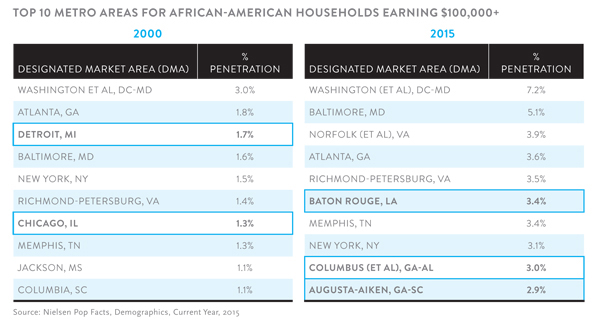 These are among the findings of a recent study by Nielsen titled, African-American Consumers: The Untold Story.

“The people we spoke with are in their high earning years, these are not African Americans who are going to the South to retire,â€ says Andrew McCaskill, senior vice president of Global Communications at Nielsen.

“The Southern migration is an opportunity and value story, not a retirement story,â€ he adds.

As for what’s behind the move to ‘southern comfort,’ McCaskill says the low unemployment rate–as highlighted in the July 2014 U.S. Senate Joint Economic Committee’s report on Increasing Economic Opportunity in the African American Community, blacks in the South have the lowest unemployment level of any region in the country at 11.2%–and affordable housing.

“Homeownership is the aspect that people understand about wealth building. The overall trend we’re seeing suggests that this is a demographic group looking for value, and looking for opportunities to build wealth. This is a hot bed of opportunity for service providers, particularly financial service companies. This group is hungry for information, and we now have the empirical data that they have income,â€ says McCaskill

“It’s a good thing for this younger generation of blacks to be moving to areas where there’s prosperity and more jobs created to welcome them and provide them with opportunities,â€ says William Frey, internationally recognized demographer, author of Diversity Explosion, and senior fellow at the Brookings Institute.

“It’s also good for the South to be able to overcome an unfortunate history and now attract blacks striving for upward mobility,â€ he adds.

More and more are striving indeed, the Census Bureau says that 55% of blacks in the U.S. now live in the South.