#BlackSTEMLikeMe Takes Over the Impact Hub 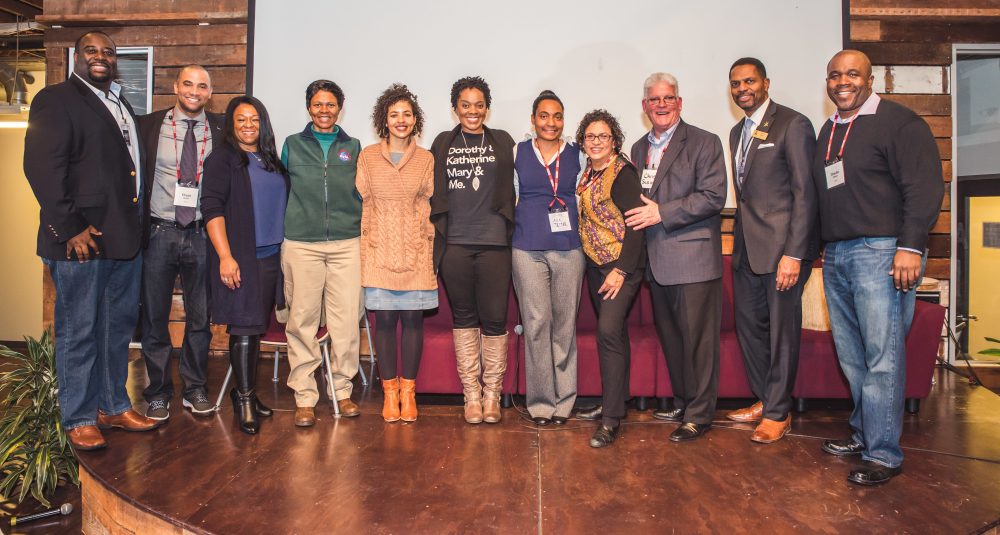 In an evening full of total engagement, immersed in the likes of entrepreneurs, astronauts, National Society of Black Engineers’ leaders and students, the #BlackSTEMLikeMe hashtag rang loud and clear.

We were met with stories of trials and triumphs, but they didn’t end on the stage. A clip was shown, we heard from speakers, and then the attention was turned to the audience. It was our turn. Topics surfaced like: explain a time when you were the “Hidden Figure” toÂ give an example of when you had to take an active leadership position and make some less than desirable decisions.

Nia Jetter, from The Boeing Co., spoke about the time she was told that she spoke like a white girl, given her pedigree from Stanford and MIT and how she dealt with it internally. Karan Kendrick, anÂ actress from Hidden Figures, gave us a story followed by a lesson learned about not allowing others to define youÂ and focusing on defining yourself from the inside out; and Toni Vanwinkle, from Adobe, encouraged us to show up as our full selves.

Chuck Baker, a partner of NSBE, decided to put on the event after being brought on to create a mobile-dominant content and advertising platform to help them serve the needs to their community, more effectively.

“We figured, let’s put on an event that can really capture all of the excitement around STEM and bring that into a venue that allows us to have meaningful conversations so that NSBE can really tell their story in a way that leverages all of the great media platforms, that are oftentimes hard to control and own as publishers,â€ said Baker. “You, as a nonprofit doing so much good, don’t necessarily have control over those platforms so let’s bring it into a controlled platform and let’s own the content and the content experience, bringing everybody into one place where we can be as effective as possible, as an organization.”

Partnering with sponsors in the field came naturally. “We felt like it was a great opportunity to continue our support with NSBE,â€ said Anne DeAngelis of Boeing.

The night culminated with over 100 engineering student registrants, some specifically from the UC Berkeley’s Black Engineering and Science Student Association (BESSA). In addition to that, the organization hosted a parallel event on Stanford’s campus the next day, to an equally sold out and enthusiastic crowd.

Karl Reid, executive director of the National Society of Black Engineers, told Black Enterprise that, they spent two years establishing a vision statement to make engineering mainstream in homes and communities of color. “#BlackSTEMLikeMe provides a forum for African Americans who currently hold high positions in these spaces to make themselves more visible to kids, so they can see themselves in positions that they don’t typically get to witness.”

Danielle Rose, chief programs officer at Level Playing Field Institute, who was sponsored by NASA while in undergrad and was also a panelist, told Black Enterprise that she hopes that with the wave we are currently going through, this will cause an awakening and we can actually make a dent in the STEM world.

“I had the opportunity to speak with an astronaut, a physician, and a scientist (in the field of biotechnology) regarding the film (Hidden Figures). All women of color. All separate conversations. Each of these brilliant women expressed such gratitude regarding the film, and each of them spoke of how validated they felt, ‘seeing themselves” on screen,’â€ Kendrick toldÂ Black Enterprise. “It was a reminder to me of how powerful art can be when it shows us the best of ourselves; and the truth about ourselves. It reminds us of who we are. It validates us. It encourages us. It propels us. And, I have to think–if it is having this effect on these women, how much more will it radically change the lives of our girls equipped with this truth so much earlier on their journey? I’m excited to see how much higher they will soar.”

From the feedback received, in conjunction with the usage of leveraging technology, it seems that NBSE is well on its way to accomplishing its goals.

Sequoia Blodgett is the Silicon Valley, Technology Editor for Black Enterprise. She is also the founder of 7AM, a lifestyle, media platform, focused on personal development, guided by informed, pop culture.

How to Prepare for Your First 5 Business Milestones