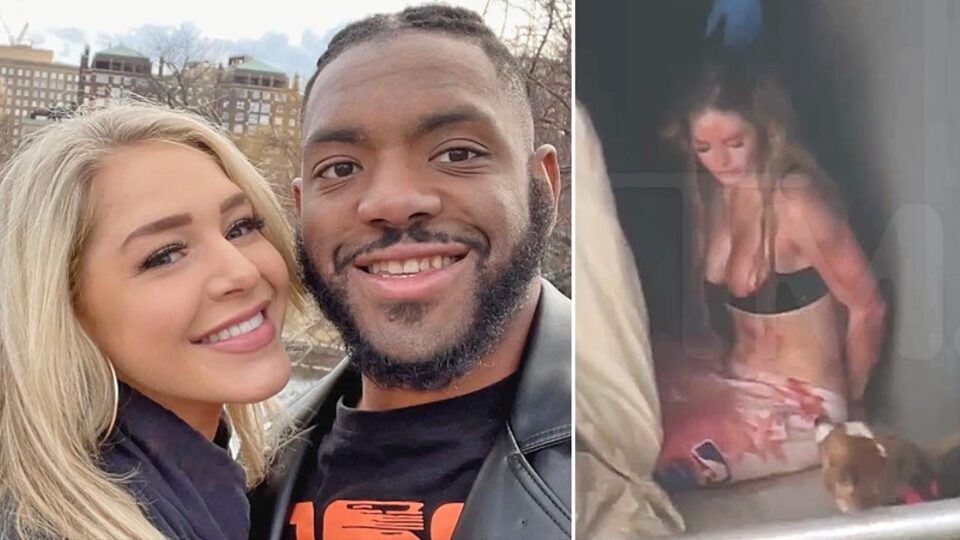 It has been a week since influencer Courtney Clenney, otherwise known as Courtney Tailor, stabbed her boyfriend Christian Toby Obumseli to death in their Miami condo, and charges have still not been filed.

New images have emerged from a video of the 25-year-old Instagram model where she is seen being detained at the scene of the crime by officers responding to the 911 call she placed inside the luxury highrise, completely drenched in what can only be Obumseli’s blood.

Obumseli, 27, was attacked inside his home and died after being transported by Miami Fire Rescue to JMH’s Ryder Trauma Center. Friends and family of Obumseli are now demanding justice in what police are calling a domestic dispute, although the model has yet to be arrested or charged.

Claiming self-defense, Clenney was taken to a psychiatric facility for a 72-hour hold under the Baker Act because she reportedly threatened suicide after the brutal murder.

A video has surfaced of Clenney out and about on Friday night in the hotel bar of Miami’s Grand Beach Hotel, where the woman recording confronted her.

Frank Prieto, the attorney representing Clenney revealed that she was the victim of “physical, emotional, and mental abuse at the hands of Mr. Obumseli,” vaguely proposing she may have also been a “victim of human trafficking.”

Those close to the couple were left in shock, although police have been called to their residence before.

“We’ve seen her hit him. I’ve never seen him hit her,” friend Ashley Vaughn said to WPLG. “From what we’ve personally experienced between the both of them, we believe that Christian wouldn’t put her in a position where she would need to stab him to protect herself,” she continued.

Authorities say a struggle ensued before Obumseli was stabbed in the shoulder.

“The family is devastated by the loss of life,” said family attorney Larry Handfield, according to NBC 6 Miami. “At this point, all they’re looking for is justice.”

“We have no cause to believe that this was a case of self defense,” said Obumseli’s cousin Karen Egbuna at a press conference. “He is one of the youngest in the family, he is loved, he is kind, he is caring, he is soft spoken… the idea that this was somehow warranted, is unthinkable.”