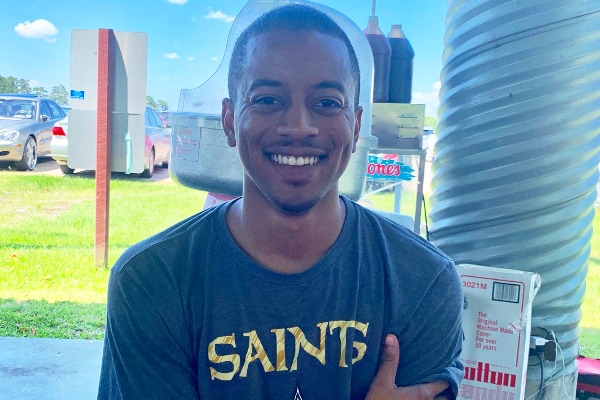 The body of 25-year-old Taylour Young was found inside the trunk of his car over one month after he was reported missing.

On Monday, Houston police confirmed that Young’s body was located at an impound lot in Dallas on Jan. 19, Click 2 Houston reported. His body was in an advanced state of decomposition.

UPDATE IN MISSING PERSON INVESTIGATION:
The body of a male, positively identified as Mr. Taylour Young, 25, was discovered in the trunk of his vehicle in an impound lot in Dallas, Texas, on Jan. 19.

As per @DallasPD, Young's body was in an advanced state of decomposition. 1/2 pic.twitter.com/ZN4bZD4d9p

Young’s girlfriend reported him missing on December 9 after he didn’t come home. The Sam Houston State University alumnus was working as an accountant and hadn’t returned from his lunch break.

“He sent me a text message about 11:30. It was a picture of his dog with the antlers on his head,” Young’s mother, Tiffany Robinson, said.

Robinson used an app to track his phone and located it in the bushes near a bank. Young’s car was also missing, prompting family and friends to get involved in his search.

Robinson said it was unlike her son to not communicate his whereabouts. He was last seen running errands while on his break, ABC 13 reported. Using the hashtag #BringTaylourHome on social media, Young’s family built a support group to find him.

Dallas police say the vehicle Young was found in was towed from a business parking lot in Dallas on Jan. 10. On Jan. 19, officials at the impound lot contacted police, who made the gruesome discovery.

An investigation into his death is still ongoing as his family and loved ones mourn his loss.

“He had no enemies. Everybody loved him. He didn’t owe anybody money. He had no addictions. He didn’t do drugs. It just makes absolutely no sense at all,” Young’s friend Christian Gorgy said.

Robinson shared a statement on Facebook about her son’s body being found after his “disappearance.”

“I want to share my worldly loss as well. I lost my son, my baby, my friend; and will raise his love, his dog Gigi… During Taylours [sic] family time of mourning, I ask that you continue to lift us up in prayer,” Robinson said.

“Be mindful and respectful of our privacy and the fact that the investigation is still ongoing.”

Speaking with People, Robinson shared stories of how loved Young was in his local community.

“He is so loved. I’ve had his coworkers tell me funny stories. I didn’t know Taylour would go to Whole Foods and play bingo with senior citizens, but a colleague of his told me that. I thought that was so funny and just the perfect example of the nice boy he is.”

Young was also working to get promoted at his job, and his managers spoke highly of him.

“The HR director at his job told me, ‘He is one of my highest performers. He’s consistent,'” Robinson shared.