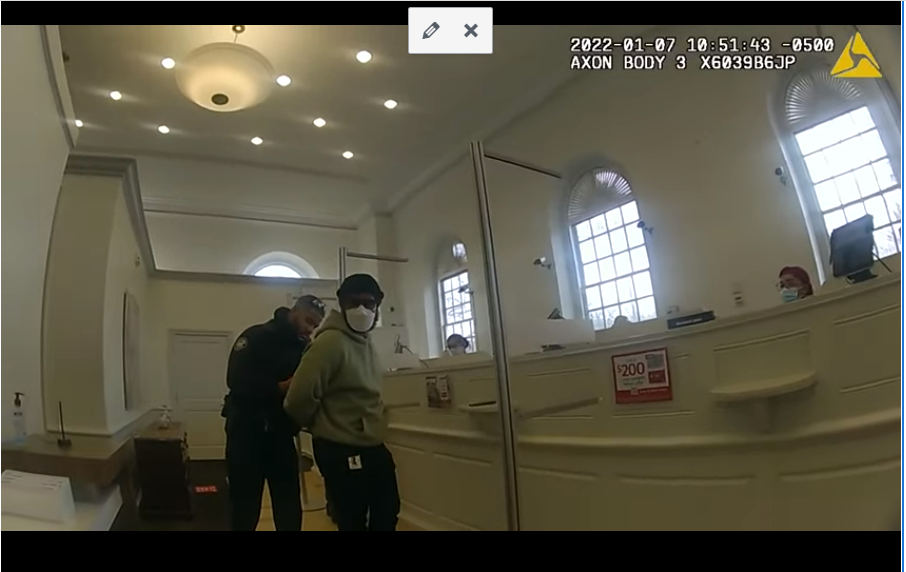 Bodycam footage of Ryan Coogler being detained inside of a Bank of America in Atlanta was released on Wednesday showing how the Black Panther director reacted to being mistaken for a bank robber.

Video shows Coogler was approached by police while he was standing at the bank teller counter on Jan. 7, Page Six reported. One officer pulled out a gun while detaining Coogler, who was instantly alarmed and asked,

Despite how surprised Coogler was by the mishap, he cooperated with the officers.

“Hands behind my back—you got it,” the Fruitvale Station director can be heard saying.

He goes on to ask, “Is there any reason y’all are doing this, bro?” However, the cops failed to provide an immediate response.

Once he was taken outside, Coogler attempted to get the officers to look at his work badge that identified who he was and possibly the major motion picture that he’s currently working on.

“If you just run my name, you’ll understand why you should take me off of these cuffs,” the famed filmmaker said, according to Page Six. “You could not do it, but it’s going to be really bad for you.”

He then advises they run his name “in Google,” but the officer appears to write it down in a notepad instead.

“I’m really trying to keep it from being a bad day on your job, bro,” Coogler adds. “Black man to black man.”

After Coogler was placed in the back of a squad car, he asked the officers to remove his sunglasses so that he could avoid having a “panic attack.”

The officers explained to Coogler that he was detained for passing a note to the bank teller asking for a large sum of money. The Creed director explained to the cops that he was seeking the money for his medical assistant who prefers to be paid in cash and only slipped the teller a note because he didn’t “feel safe.”

In the note, obtained by TMZ, Coogler wrote, “I would like to withdraw $12,000 cash from my checking account. Please do the money count somewhere else. I’d like to be discreet.”

In released audio of the teller’s 911 call, the Bank of America employee can be heard telling the dispatcher, “I told my manager that I didn’t feel comfortable so he told me to call the police,” the employee said before reading Coogler’s note aloud. “It just says, ‘I wanna withdraw $12,000, just be discreet.'”

The dispatcher noted that the suspect probably just wanted to be discreet about taking out the large sum of money. But the teller replied,

“Yeah, I mean, he might but he’s just being weird.”

1. Teller admits to receiving ID & NOT looking at it

2. Dispatch sent officers BEFORE receiving all pertinent info & says “none of his information was even verified” & sounded like even she didn’t believe a crime was in progress

Coogler released a statement on the bank robbery mishap.

“This situation should never have happened. However, Bank of America worked with me and addressed it to my satisfaction and we have moved on,” Coogler told “Variety.”