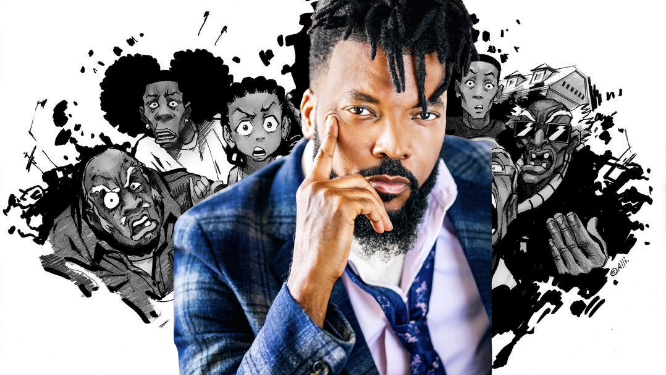 You may not know it, but you’ve seen Carl Jones’ name scrolls across the ending credits of some of the most popular shows in the last decade.

In addition to Adult Swim’s The Boondocks and Black Dynamite, Jones has also worked on TBS’ The Last OG. However, he’s branching out with his NFT Project BUBBLEGOOSE BALLERS, which has been a massive hit, selling 10,000 digital generative art pieces on its first day.

Jones, born and raised in Fayetteville, North Carolina, told BLACK ENTERPRISE he’s been drawing since the day he could hold a pencil and Bubblegoose Ballers is a concept that’s been with him from the start.

“It’s based on a character I designed when I was a kid growing up in North Carolina during the crack epidemic,” Jones said. “There were a lot of drug dealers in my neighborhood that would wear bubble goose coats. I was always sketching these characters with bubble goose-down coats in my sketchbook, and then one day, I had this idea of drawing a goose in a bubble Goose coat.”

Jones added he continued drawing out the concept in his sketchbook as he got older and eventually began working with Adult Swim to create an animated pilot, but creative differences led to Jones walking away from the idea.

“So I basically put it away until this opportunity came about to launch it as an NFT,” Jones added.

Jones has also started his own animation studio, MartianBlueberry, with his partner Love Barnett, who has produced animated projects at Jones’ side for recording artists Trippie Redd and Megan Thee Stallion.

Jones and Barnett plan to use their wealth of experience, production knowledge, and industry resources to tell stories that speak to diverse communities in ways that larger animation studios may not understand. Something Jones experienced while working on The Boondocks.

“It definitely helped me understand the importance of doing something honest and specific to your own experience,” Jones told Black Enterprise. “Writing from a real place and telling stories that mean something to you and representing us in many different perspectives as well.

“The Boondocks was the show that had many different entry points into that world, so you had characters like Uncle Ruckus and Huey and Riley, and they were all representative of an aspect of our culture versus a monolithic way of approaching Black people and how we’re represented on TV, so that is something I apply in everything that I do since then.”

“I always felt like there wasn’t enough representation on the production side of animation, and we’ve always run into this problem of producing shows for studios that don’t understand the culture and don’t understand the nuances and specificity of the culture,” Jones told Black Enterprise. “So I always wanted to start a company that specializes in that area so that we can get the true representation we want.”