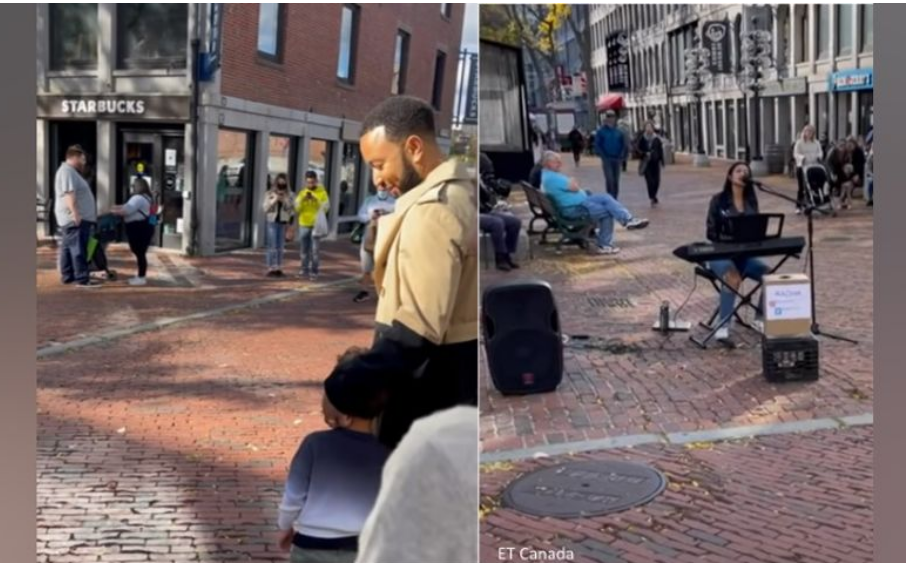 Ordinary people stand and watch street performer Radha Rao belt out tunes all the time, but it was true glory when R&B star John Legend showed up as she sang one of his hits.

The Boston street artist got the surprise of her life while performing this past weekend when Legend strolled up as a spectator to watch Rao sing his acclaimed hit “All of Me” along with his wife, Chrissy Teigen, 42, and their two children, Luna and Miles.

Rao was stunned to see the star, especially since she’s been doing this act every weekend for the last three months at Faneuil Hall, a large marketplace center in Boston, Massachusetts.

As part of her two-hour set, Rao typically sings one of Legend’s hits. But on Sunday, Legend’s presence was the real showstopper.

“Reflecting on this past Sunday—I had the opportunity to sing for John Legend and his family during one of my gigs @faneuilhall . I want to thank everyone who listened in and encouraged me, including @johnlegend, who stayed to support local talent. To me, it feels like a mix of divine timing and luck. Several times a month, I perform my two-hour set – a mix of R&B, soul, pop, and my own originals. All of Me is part of my regular set, and this Sunday feels like a gratifying step in my creative journey as I continue to seek out growth and deepen my artistry in the Boston scene and beyond.”

Rao spoke exclusively to Insider and expressed how she felt when she realized that Legend was standing in the crowd viewing her performance.

“Around the middle of the song, I see a man in a trench coat and a mask with a couple of kids, and I think, ‘Wow, that looks just like John legend,'” Rao told Insider. “I didn’t think too much into it until he took his mask off, and then it was very apparent to me that was the man himself.”

“I wanted to continue making a beautiful moment out of the experience and the interaction. I continued to play and give it my best. “I was just very honored that he decided to stand and listen and appreciate local talent. It meant so much to me.”