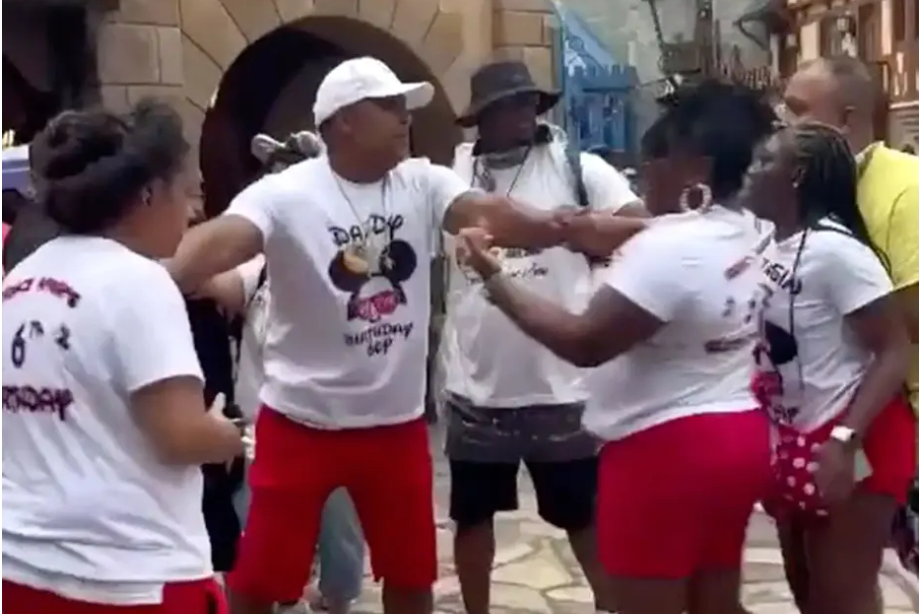 A man was hospitalized, feelings were hurt and at least 10 people engaged in fisticuffs at the self-proclaimed Happiest Place on Earth.

On Wednesday, fists were flying in a scene straight out of the Jerry Springer show, inside Magic Kingdom at Walt Disney World in Orlando Florida, “Walt Disney World News Today,” blog reports.

Two families fought it out, creating chaos, coupled with crying kids and pissed-off adults, all reportedly over someone skipping the line.

According to the Disney World blog the two families were stationed at Mickey’s PhilharMagic theatre, waiting in line to enter when one person left her family reportedly to retrieve her phone she left in another area.

The person who left returned to join her family but reportedly the other family dressed in matching red shorts and white tees took it upon themselves to try and block the person they assumed was attempting to skip the line.

From there, the families started feuding, hurling profanities and ultimately brawling. The erratic scene and confusion caused parents to grab their children and take cover, while onlookers whipped out their cellphones and recorded the fracas.

The alarming ordeal came to an end thanks to Walt Disney World security and law enforcement, the Disney blog reports.

According to reports, a man who had a cut on his chin was taken by ambulance to a local hospital.

No word on if any of the families will press charges, even after making claims that the red-shorts family allegedly “stole or broke several personal items belonging to their opponents including mobile phones and designer clothes,” the blog reports.

However, the blog has reported, “A guest involved in yesterday’s Magic Kingdom brawl has reached out to us again letting us know that their family has been banned from Walt Disney World and guests from the other family involved were arrested.”

It’s too hot outside for this… Stay cool folks.