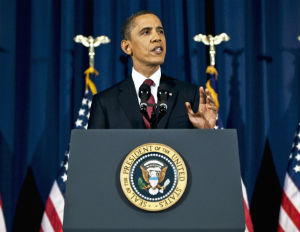 On Tuesday morning, Brussels was devastated by three separate terrorist attacks. Two occurred at an airport, with one reported to be a suicide bomber. Another explosion occurred at a busy subway station. Details are still emerging, but the Belgian government has confirmed at least 34 dead.

During a speech to the Cuban people at the Gran Teatro de la Havana, President Obama addressed the attacks.

“The thoughts and the prayers of the American people are with the people of Belgium. We stand in solidarity with them.”

“We will do whatever is necessary to support our friend and ally in Belgium in bring to justice those who are responsible,” Obama continued. “This is yet another reminder that the world must unite. We must be together, regardless of nationality or race or faith, in fighting against the scourge of terrorism. We can and we will defeat those who threaten the safety and security of people all around the world.”