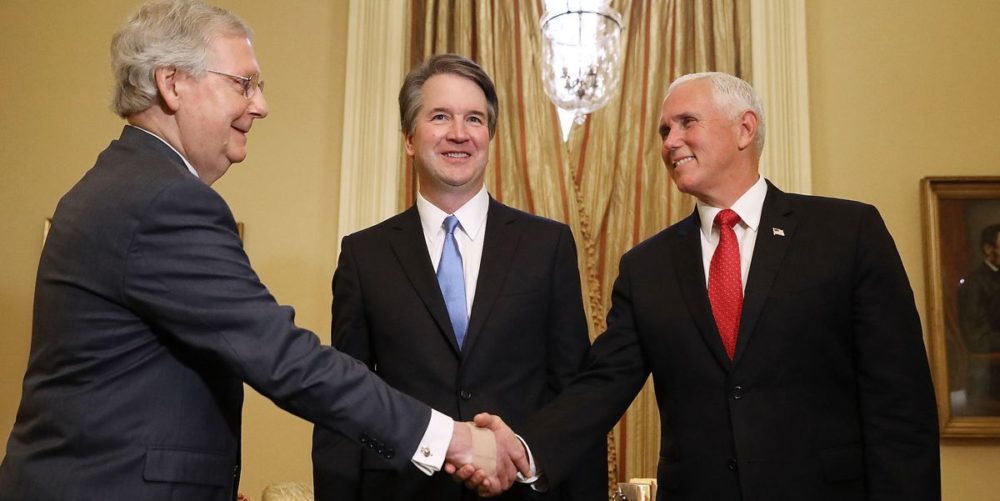 Of all of President Donald Trump’s demagoguery against free speech, the press, religious rights, due process, and women’s control over their bodies, no decision carries such far-reaching and lasting consequences for women, people of color, and other groups, over generations than his Supreme Court pick of Judge Brett Kavanaugh.

“This Supreme Court nomination is the most consequential to be taken up in decades. Since Justice Sandra Day O’Connor’s retirement from the court, Justice (Anthony) Kennedy has been a critical swing vote on some of the most important civil rights issues to come before the court. This nomination stands to change the balance on the court for generations to come,” said Kristen Clarke, president and executive director of the Lawyers’ Committee for Civil Rights Under Law.

On a press conference call on Tuesday, Clarke said it was time for Senate Democrats to carry out their constitutional duty of fully and properly vetting Kavanaugh’s records. Trump, throughout his campaign for president, has publicly stated that he’d like to see Roe v. Wade, the landmark 1973 decision that legalized abortions nationwide, overturned. Last October, during the last presidential debate, he was asked his opinion on the issue.

“Well, if we put another two or perhaps three justices on, that’s really what’s going to be—that will happen,” Trump said at the debate. “And that’ll happen automatically, in my opinion, because I am putting pro-life justices on the court. I will say this: It will go back to the states, and the states will then make a determination.”

So far, the president has been able to get Neil Gorsuch, a conservative, on the Supreme Court bench. With Justice Anthony Kennedy’s retirement, whose votes helped swing decisions to the left on issues like abortion, affirmative action, and gay rights, Trump now has a pathway to select a second conservative justice onto the Supreme Court. This means civil rights cases will be some of the most monumental cases that will be brought before the Supreme Court for years to come, Clarke said.

If there is any doubt about what kind of long-lasting damage Kavanaugh’s confirmation to the Supreme Court bench could do to black and brown people’s civil and human rights, one need not look past Gorsuch’s record since being on the bench for only 11 weeks. The court struck down a law that treated LGBTQ couples differently on their children’s birth certificates. The court refused a challenge to the Department of Veteran Affairs’ system for evaluating disability claims. A challenge to California’s law limiting who can carry a concealed firearm in public was declined by the court. All of which Gorsuch dissented on, according to USA Today.

Kavanaugh, 53, has a dangerous track record of protecting the privileges of the wealthy and powerful at the expense of working people, AFL-CIO President Richard Trumka said in a statement. When asked about what his personal opinion on abortion was during his 2006 confirmation hearing for the D.C. Circuit Court, Kavanaugh declined to answer, saying: “I don’t think it would be appropriate for me to give a personal view on that case.”

On Abortion Rights: While the Appeals court in Washington allowed a detained undocumented immigrant minor to seek an abortion last fall, Kavanaugh, who dissented said the majority who voted “yes” had “badly erred” and created a new right for undocumented immigrant minors in custody to “immediate abortion on demand” according to the Washington Post.

Religion: A part of the Obamacare Act required insurers to cover contraception, but some employers objected on religious grounds. To avoid paying a fine, “employers can bypass the requirement by submitting a form to their insurers, which then cover the workers’ contraception at no expense to the employers.” Forcing employers to submit the form violated their religious liberty, Kavanaugh wrote, siding with religious organizations who contended that “even submitting the form made them complicit in providing contraception.”

Consumer Rights: Consumer advocacy groups are worried about Brett Kavanaugh, especially because of the history that he has with the Consumer Financial Protection Bureau (CFPB) arguing that the financial regulatory entity’s mere existence was unconstitutional. In 2014, CFPB alleged that mortgage company PHH Corp. had “harmed consumers through a mortgage insurance kickback scheme that started as early as 1995.” A year later, the company was ordered to pay $109 million in fines. PHH sued to have the fines vacated, and Kavanaugh was on a three-judge panel that ruled in favor of the company, taking issue with CFPB’s organizational set up.

Second Amendment/Gun Rights: In a 2011 case in which the DC Circuit court “upheld a ban that applied to semiautomatic rifles in the District of Columbia” Kavanaugh, who dissented from a majority opinion wrote that the Supreme Court had previously “held that handguns—the vast majority of which today are semi-automatic—are constitutionally protected because they have not traditionally been banned and are in common use by law-abiding citizens.”

Voting Rights: When South Carolina first tried to implement its now passed Voter ID law that required voters to present government-issued photo ID in order to cast a ballot in the 2012 elections, Kavanaugh was one of three panel judges who ruled to block its enforcement. The court, however, ruled that the state may put the law in effect in the future “to allow time to educate voters about the requirement.”

“At first blush, one might have thought South Carolina had enacted a very strict photo ID law,” wrote Kavanaugh. “Much of the initial rhetoric surrounding the law suggested as much. But that rhetoric was based on a misunderstanding of how the law would work.” The law, as construed by South Carolina officials, “does not have the effects that some expected and some feared,” the judge wrote.

Rev. Al Sharpton, who was on the press call on Tuesday said Kavanaugh’s confirmation process was moving too fast. Before Kavanaugh’s records are examined, Senate Democrats need to ensure that the “McConnell Rule” which Senate Majority Leader Mitch McConnell put in place and used to derail former president Barack Obama’s pick to the court a couple of years ago be applied at this go, he said.

“Not only are we very much concerned that we may now have a right-wing jurist given his record. We’re also concerned that the process itself is going through and no one is raising the fact that when Barrack Obama as president had nominated Garland, McConnell went ahead and very directly and openly changed the rules and they are allowing them to change the rules back,” said Sharpton. “Democrats are to stall and really wait until after the election because this is a premise that was set by McConnell and others in the last election, nomination process with Judge Garland.”

“We are calling on every Democrat to not leap with Kavanaugh. We are calling on them to bring the argument to the American people before we get to his credentials or anything else. The process itself is being politicized, which is opposite of what the court is supposed to do,” Al Sharpton said.

Since the court was established in 1789, there have been 153 nominations to the US Supreme Court, 30 of which were unsuccessful in their first try, and Clarke said Senate Democrats need to ensure Trump’s pick wait till the November elections are over.

“The Senate should not rubber-stamp the nomination of Judge Kavanaugh. It’s time for them to carry out their constitutional duty of fully and properly vetting him (Judge Kavanaugh),” she said.