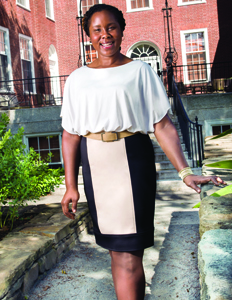 Bridwell-Mitchell always had a strong desire to change the way schools were run and to ensure that policy trickles down in a way that would better serve black students and students from underserved neighborhoods.

How she got the job:
In 2011, while working with the commerce, organization, and entrepreneurship program at Brown University, Bridwell-Mitchell learned that Harvard was creating a new program at its Graduate School of Education. “The new program was a culmination of public policy, business management, and education curriculum, which was the perfect job for me based on my training,â€ she explains. But Bridwell-Mitchell considered not applying for the Harvard job. Instinctively she felt that balancing research with policy and practice is not real academia. “Publishing in the top-tier academic journals is the standard of excellence in the field; publishing for policy or practitioners is often considered valuable, but less important. Academia has a set of standards that you move up based on the number of articles that you get published in the highest ranked publications, which cater to an exclusive audience of other academics that doesn’t include the general public, community educators, and the people on the ground at local schools.â€ But Bridwell-Mitchell also recognized that if she wanted to have an impact on schools and education, she needed to be working in an academic department much closer to that field, and this caused her to reconsider.

Experience and training:
During her undergraduate studies, Bridwell-Mitchell interned at the Urban League of Eastern Massachusetts and the U.S. Department of Education. She also interned and did consulting at Benjamin Banneker Charter Public School in Cambridge, Massachusetts, while a student at Harvard’s Kennedy School. “After graduating from the Kennedy School, I wanted to become a public school teacher. I wanted to work in an urban school