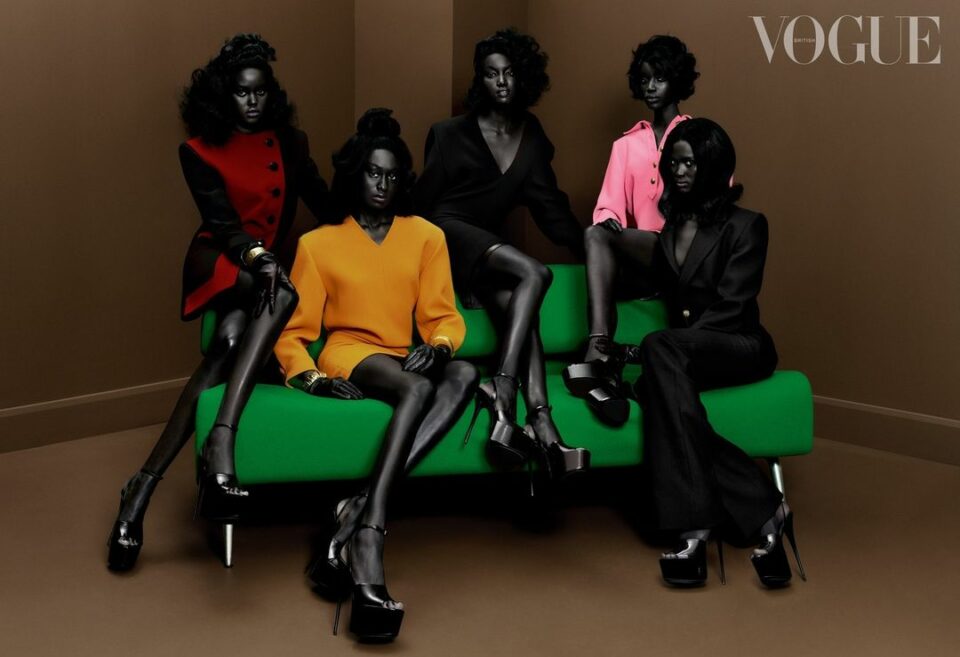 British Vogue’s upcoming February 2022 cover has sparked quite a bit of conversation since it was revealed on Friday.

However, while many are celebrating the images as brilliant and even groundbreaking, many have questioned the artistic liberties taken in the photos, styled by British Vogue editor-in-chief Edward Enniful.

This cover is weird. The lighting is off. The backdrop is off. The various skin tones and highlights are missing. And the African models are all in European styled wigs. Huh? @BritishVogue definitely needs to hire Black women photographers. https://t.co/Uz9VJUKW4k

All of the models seem to have intentionally made to appear darker in the new British Vogue shoot.

This cover is weird. The lighting is off. The backdrop is off. The various skin tones and highlights are missing. And the African models are all in European styled wigs. Huh? @BritishVogue definitely needs to hire Black women photographers. https://t.co/Uz9VJUKW4k

I can understand why people think the British Vogue cover is great but the comments below begin to depict why it really isn’t. The cover could have been so much better! pic.twitter.com/534eLSxXcJ

The article which accompanies these photos, written by contributing editor Funmi Fetto, aims to celebrate the fact that the era of celebrating or uplifting one African model at a time has shifted.

“You know, fashion tends to follow waves,” says Vogue Editor-In-Chief Edward Enniful, who styled the cover and the photos featured in the article. “We’ve had the Brazilian wave. We had the Dutch wave, the Russian wave, the Eastern European wave… And while, in the last decade, the Black model has come to prominence, I love that we are finally giving more space to African beauty.”

But comedian Akau Jambo suggests that the fashion world’s new found love of African beauty, and even these images, are rooted in something much more sinister.

I am South Sudanese. I have lived here probably longer than these models and I can assure you that there is nobody moving around looking like this.

I think it’s important to note what those decades have in common;

Lies; All South Sudanese stories that you have heard are genuine or have a little bit of truth in them but the media has noticed the high demand for sad stories. They know people spend when they are sad.

This has seen a lot of lies and exaggeration. This picture is not far from the decade before. It’s only that the market has changed. The market has a fetish for dark skinned girls.

The exaggeration and lies continue. In the next cover, they are gonna make their souls dark too.

Also, just a reminder that skin lightening happens constantly, so in response to the argument ‘would they do this to white people???’ uh, yes. Which is also problematic but imo derails the conversation.

We don’t always need to bring up other race’s issues when talking about us.