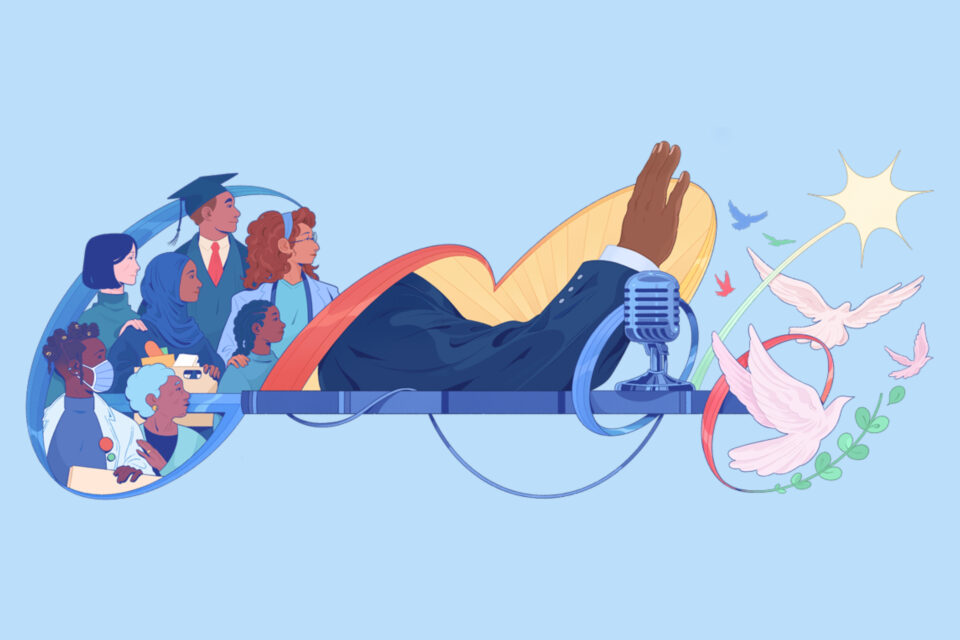 This year, the company tapped Brooklyn illustrator Olivia Fields, who rendered what she calls a “future-focused” image, inspired by Dr. King’s words.

“The quote, ‘The arc of the moral universe is long, but it bends toward justice.’ influenced the initial conception of the doodle,” she explains to Google. “I decided to focus on the visual of an arc to establish the movement in the piece. And everything moves, looks on, in the same direction….forward.”

Fields – whose past work has been featured in publications like The New Yorker and  the Washington Post, on television through collaborations with brands like Cartoon Network, and on XBOX games – says drawing a Google Doodle has been a longtime goal.

Being assigned to honor Dr. King’s work and legacy made achieving this goal all the more special.

“To depict one of the most prominent figures of the civil rights movement in American history was a great honor,” she says. “My life has been shaped by the activism that took place in the past and continues to be formed by the movements that exist today. It cannot be understated how much is owed to individuals like Dr. King who have fought to make a better life for everyone. Not just to survive, but to thrive and to live fully. It should always be acknowledged.”

The Google Doodle was first introduced in 2000, when then intern David Hwang drew an alternate version of the company’s logo to celebrate Bastille Day. Since then, the company has created a separate department responsible which has commemorated over 4000 important historical events and figures in the same way.

The Doodle first recognized the King Holiday in 2003 and has done so every year since 2006, often tapping prominent and up-and-coming Black artists to share their reimagining of the logo.

Last year, Google used the occasion to introduce “Still Dreaming,” a miniature art exhibit by artist Tammie Knight, which was curated by Adrian Octavius Walker with photography from the Google Arts & Culture archives.