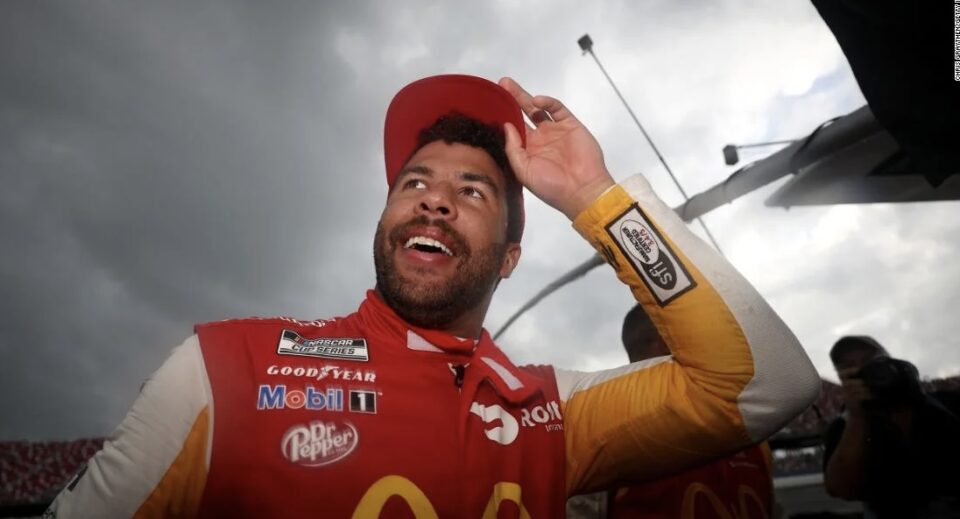 In a white-male-dominated sport —Bubba Wallace is on top — and has made HIS story.

Wallace became the first Black driver since 1963 to win a NASCAR Cup Series race at the Talladega Superspeedway.

With his latest win, Wallace joins the 2015 Hall of Fame inductee Wendell Scott as the only two Black drivers to win a cup race in NASCAR. However, Wallace’s win is different in that Scott’s was not declared the winner for several months.

The historic victory comes following a year of controversy in the sport. Wallace made headlines when he spoke out about social injustice and police brutality against Black people and pushed NASCAR to ban the confederate flag. Wallace then decided to take his activism a step further and chose to drive in a Black Lives Matter stockcar during a cap series race.

His demonstration was met with racism as the FBI would have to investigate an incident in which an alleged noose was found in his garage in Talladega. Officials later said the object was a door pull and not a noose. Wallace rejects the FBI’s conclusion.

Wallace has called the noose incident a low point in his life and has continuously been subjected to online harassment.

“This is for all the kids out there that want to have an opportunity and whatever they want to achieve, and be the best at what they want to do,” Wallace said as he choked back tears.

“You’re going to go through a lot of (BS). But you always got to stick true to your path and not let the nonsense get to you. “Stay strong. Stay humble. Stay hungry. Been plenty of times when I wanted to give up.”

Wallace, who had been driving in co-owner Michael Jordan‘s 23XI Racing Toyota car, led his pit crew in celebration when the race was called.

“I know a lot of history was made today, I believe, which is really cool. But it’s about my guys, about our team, about what we’ve done. Appreciate Michael Jordan, appreciate Denny for believing in me, giving me an opportunity. Like we talked, it’s pretty fitting that it comes here at Talladega,” Wallace said.

‘@BubbaWallace is doing the rain dance, leading past the halfway mark. #NASCAR pic.twitter.com/nEpYd1Q0pY