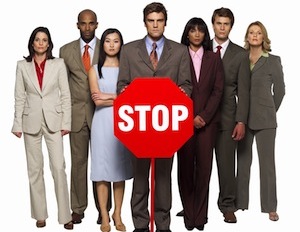 Business etiquette and common courtesy still counts, even in the age of social media, video conferencing and e-mailed thank you notes. And the absence of it is rarely more apparent than at business conventions and networking events such as the Black Enterprise Entrepreneurs Summit.

Whether out of naive inexperience or an ingrained and practiced insensitivity to others, there is always a hopefully small percentage of attendees who sabotage their return on investment from their conference attendance by forgetting that the first rule of networking is to bring positive value and experiences to others. Common courtesy is rarely common, and almost never an accident. Smart business people go out of their way to avoid being THAT PERSON. Make brushing up on your business etiquette a part of your conference preparation. Remember, mistakes can be not only embarrassing to you and others, but can be costly, causing you to lose key connections or potential contracts. Please, don’t let the following people be you:

THAT PERSON who shows up without an elevator pitch for his business, forcing everyone they meet at the conference to listen to a long-winded, unfocused and boring description of every detail of his/her business model. Somehow, when it’s that person’s turn to listen, they suddenly have someplace else to be, another audience to capture. Take a hint from Black Enterprise Founder, Publisher and networking master Earl G. Graves Sr.: “When networking, find a common interest–and don’t assume it is you. Networking is a two-way street. If you don’t bring something to the table, if you aren’t prepared to listen as well as be heard, then you’ve failed to grasp the concept.”

THAT PERSON who obviously ignored the repeated announcement to turn off your cell phone (or at least set it to vibrate) during conference sessions, since their phone is ringing. At full volume. And for some reason, they have no idea where they put it. This one is simple: check your phone before you walk into the session.

THAT PERSON who arrives a half-hour after the session has started and insists on coming to the front of the room and squeezing past a dozen seated attendees in order to sit next to a colleague. And don’t be THAT [OTHER] PERSON, the colleague who saved the seat, not allowing anyone else to sit there even though they actually arrived on time for the session. This seat is reserved? Really? No, really? Actually, it isn’t. The only seat you own is the one you’re sitting in–period. If you arrive after the session has started, take the nearest available seat and settle in as discreetly as possible, doing your best to not be a distraction to others. Reconnect with your colleague after the session.

THOSE PEOPLE holding their own presumably fascinating panel discussion in the audience–during a conference session–disrupting other attendees, making them unable to listen to the panel of experts they actually came to hear. Yes, we can hear you. Try sending texts to one another, or passing notes, but keep conversations during sessions as brief and discreet as possible.

THAT PERSON who commandeers and dominates the Q&A time at the end of conference sessions. The moderator called for questions–not your business plan’s executive summary, credentials as a business owner or your pitch for new customers. Still, that person insists on treating the Q&A session as their private consultation with the panel, with zero regard for the 10 people waiting in line to ask their questions and the hundreds of session attendees who came for answers–from the panelists, not you. Conference protocol and basic courtesy call for you to state your name, ask one question and take your seat, so that as many other people as possible can get their questions in, too, and every attendee can benefit from the answers.

THAT PERSON who holds a speaker hostage after a session with their networking speech, questions and follow-up questions, with zero regard for the 20 fellow conference attendees standing behind them who also want to get their questions in before the speaker has to leave. How about getting a card and following up with them later via e-mail or their social media profile? Not that your can’t-miss business proposition is not a source of fascination for all.

As the late University of Alabama football coaching legend Bear Bryant used to tell his players after they scored a touchdown: Act like you’ve been there before. If you don’t know the rules of conference and networking etiquette, ask somebody. Just don’t be THAT PERSON. Better yet, take some time to do a refresher on networking etiquette before you get to your next conference. Do you have networking etiquette tips or other “don’t be THAT PERSON” experiences? Share and discuss them here in the comments section below, so we can educate one another to network more effectively and make our conference experiences more enjoyable and productive.

Join me at the 2015 Black Enterprise Entrepreneurs Summit hosted by Nationwide, May 13-16, in Atlanta, “Where Innovation and Capital Meet.” Expect innovative sessions, high-powered speakers, and an early peek at the products, trends, and services you’ll need to stay ahead of the curve.

FacebookTwitterYoutube
← 5 Princess Bridal Looks for Less than $1,000 ← 10 Twitter Accounts That Can Prep You For College
×
'