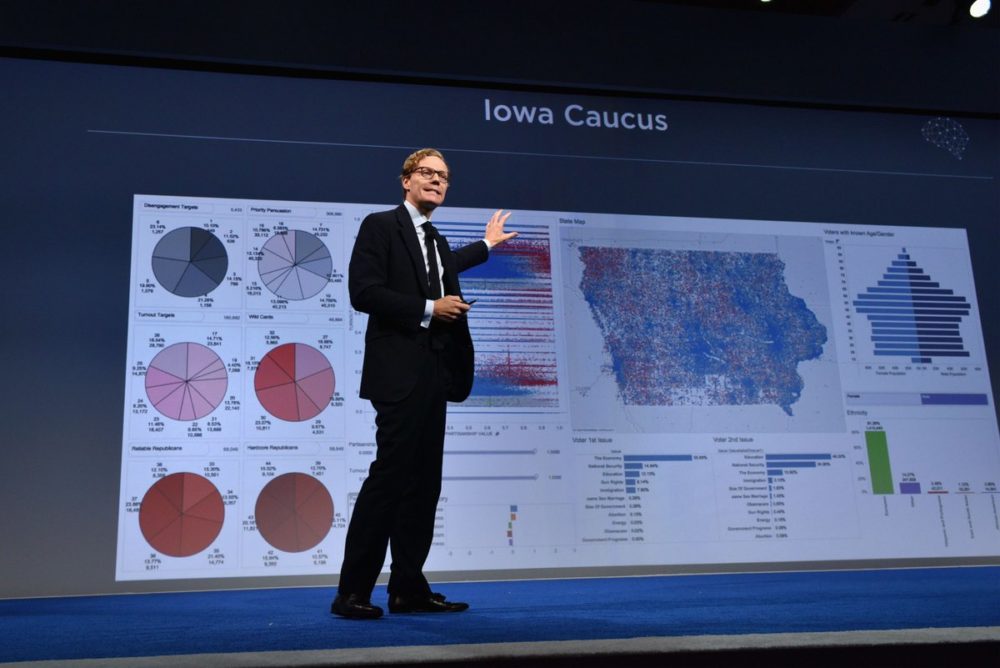 Alexander Nix, the embattled chief executive of Cambridge Analytica used racial slurs to describe two of his potential black clients in an email.

Much has been written about 42-year old Nix, whose political consulting firm is now in the middle of a political scandal that has seen debates about privacy laws and cybersecurity rise to levels not seen since Edward Snowden.

Cambridge Analytica suspended Nix on Tuesday after an undercover investigation by Britain’s Channel 4 showed Nix and his colleagues boasting on camera about their election work around the world entrapping politicians with bribes and sex workers.

For a while, there have been stories swirling in the media about Russia’s meddling in the 2016 presidential elections without concrete evidence. Last weekend, however, The New York Times and The Guardian published interviews with Christopher Wylie, a former contractor at Cambridge Analytica who claimed to have hijacked tens of millions of Facebook profiles in order to target the American electorate.

“We ‘broke’ Facebook,” 28-year old Wylie told the Guardian. “I’ll point out that I assumed it was entirely legal and above board.”

“It’s like dirty MI6 because you’re not constrained. There’s no having to go to a judge to apply for permission. It’s normal for a ‘market research company’ to amass data on domestic populations. And if you’re working in some country and there’s an auxiliary benefit to a current client with aligned interests, well that’s just a bonus.”

Facebook had only 20 million users when it opened up its platform to third-party developers in 2007.

“Until now, social networks have been closed platforms. Today, we’re going to end that,” Facebook founder, Mark Zuckerberg said at the time.

Over the years, with access to Facebook’s tools and a treasure trove of personal user data, developers were able to build online games, quizzes, and even dating apps. It was part of how the social media giant was able to grow its user base.

One such company is Global Science Research (GSR), a company which the Guardian said is “specifically premised on the harvesting and processing of Facebook data so that it could be matched to personality traits and voter rolls.”

Cambridge Analytica illegally obtained from Global Science Research (GSR) private Facebook information on tens of millions of users which were then used to develop “psychographic” profiles on voters.

“Facebook could see it was happening,” Wylie told the Guardian. “Their security protocols were triggered because Kogan’s apps were pulling this enormous amount of data, but apparently [Aleksandr] Kogan (a senior data scientist for GSR) told them it was for academic use. So they were like, ‘Fine’.”

Many countries already have strict privacy laws in place that prohibit the sale of users’ personal data to a third party without consent, so how did Facebook drop the ball? According to the Times, Kogan had permission to pull the user data from Facebook, but only for academic purposes only.

“Kogan was able to throw money at the hard problem of acquiring personal data: he advertised for people who were willing to be paid to take a personality quiz on Amazon’s Mechanical Turk and Qualtrics. At the end of which Kogan’s app, called thisismydigitallife, gave him permission to access their Facebook profiles. And not just theirs, but their friends’ too. On average, each “seeder”—the people who had taken the personality test, around 320,000 in total—unwittingly gave access to at least 160 other people’s profiles, none of whom would have known or had reason to suspect.”

The real scandal, however, isn’t what Cambridge Analytica did, it’s what Facebook made possible, Slate opined.

“In short, the outrage now directed at Facebook feels disproportionate to the company’s culpability in this specific episode,” Will Oremus wrote in his column.

Sensational as it sounds, however, the Cambridge Analytica scandal doesn’t indict Facebook in quite the way it might seem. It reveals almost nothing about the social network or its data policies that wasn’t already widely known, and there’s little evidence of blatant wrongdoing by Facebook or its employees. It’s also far from clear what impact, if any, the ill-gotten personal data had on the election’s outcome.

U.S. Rep. Bobby L. Rush (D-Ill.) today introduced the Data Accountability and Trust Act (DATA) that would require companies that own or possess data containing personal information to “establish specified security policies and procedures to treat and protect such information.”

His bill isn’t new though. Rush has been pushing the DATA Act since 2009.

“If my bill were law today, Facebook users would have learned far earlier that their data was being improperly used and weaponized,” Rush said. “Instead of misrepresenting their intent, Cambridge Analytica would have had to get authorization to use and sell this sort of data and both them and Facebook—who has yet to officially notify its users—would be financially liable for their irresponsible and deceptive behavior.”

The DATA Act will specifically require notification from companies within 30 days following a breach and must clarify whether the unauthorized acquisition, access, or sale of data constitutes a breach.

Fan Yuan, along with a number of undisclosed investors who invested in Facebook between Feb. 3, 2017, and March 19, 2018, has filed a federal suit in San Francisco, according to CNN.

The lawsuit claims Facebook withheld information that it allowed third parties to access data on millions of people without their consent and that the social media giant made false and misleading statements about its policies.

“As a result of Defendants’ wrongful acts and omissions, and the precipitous decline in the market value of the Company’s common shares, Plaintiff and other Class members have suffered significant losses and damages,” the lawsuit said.

Facebook has also suspended Cambridge Analytica after reports that the firm harvested and retained the personal data of 50 million social media users without their knowledge or permission.

On Thursday, Zuckerberg was summoned by the House Energy and Commerce Committee to testify on Capitol Hill.