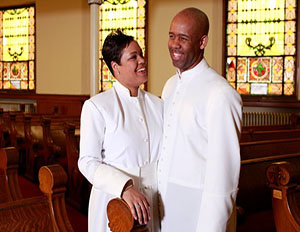 For Cory and Courtney Jenkins, ministry is not just a calling. It’s a passion and profession that has empowered and strengthened their marriage, their congregations, and their ministries. As pastors of their respective churches and founders of Team Jenkins Ministries Inc., the couple’s faith-based lifestyle is one that doesn’t end with the typical clocking out.

Cory and Courtney married in 2008 after meeting at Princeton Theological Seminary, where they both were studying to receive their Master’s of Divinity degrees.Â  Though they had previously been at neighboring HBCU’s during the same time— Spelman and Morehouse Colleges— it wasn’t until they sought to equip themselves for ministry when they really connected.

A Unique Assignment: While couples in ministry are becoming more common in today’s churches, Courtney, 30, and Cory, 30, pastor separate congregations in different denominations. Cory serves as senior pastor at Shiloh Baptist Church in Cleveland. And Courtney is the first African-American and female pastor at Euclid Avenue Congregational Church in the United Church of Christ. Though very close in proximity— just about five minutes apart—the two churches serve very different neighborhoods and cultures.

The Work Day: While most clergy couples are together on Sunday mornings, Courtney and Cory each head to their own churches where they minister and manage on a full-time basis. Cory says since they both have a pastoral perspective, they can share similar experiences and learn from one another. In addition to the commonality of their careers, Courtney likes the unique opportunity that they get to do ministry on an even greater scale. Oftentimes, their churches will partner together to reach a greater audience and serve more people.Â  “It’s a wonderful opportunity to combine ideas, power, and resources that we might be able to make a greater impact,â€ Courtney says.

Brand-Building: As a young married couple Courtney and Cory are often asked to teach and advise on the topic of marriage. The innovative couple even tag teams, giving them the opportunity to share both of their perspectives on a particular topic or issue. They have dedicated much of their careers in ministry to helping enrich the marriages of those they encounter through advisement and counseling.

Work-Life Balance: Both Courtney and Cory stress the importance of maintaining a balance between marriage and their ministries. They’ve found a way to focus on husband-and-wife time by having “Marriage Mondays,” where they spend the day together lounging at home or take a quick vacation. “[Our] marriage is our first ministry,â€ Courtney says.Â  “If that’s not right, nothing else is.â€

Here are a few tips from the Jenkins on finding success in professions of ministry:

Education is still necessary: The Jenkins urge those who want to pursue ministry to invest in higher education and training in order to qualify themselves for the calling and enhance their gifts.

Be aware that it’s not your typical 9-to-5 job: Ministry is oftentimes not a Sunday-only occupation, the Jenkins say. Obligations for building a successful ministry can mean a 24-7, 365-day commitment. It requires preparation, selflessness, and accessibility, the Jenkins say.

Character and integrity are top tenants of a successful ministry: The profession of ministry is one that can sometimes be compromised or mishandled. One can easily become consumed with the bright lights and accolades that come along with ministry. Cory and Courtney are mindful to always hold in high regard the significant magnitude of what they believe is God’s calling on their lives.