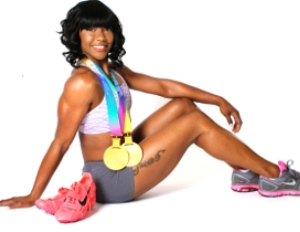 Next summer the world’s attention will be focused on London for 2012 Olympic Games and one athlete track and field fans will be watching is Team USA’s Carmelita Jeter (pronounced “JEHT-er,” not “JEET-er”).

Nicknamed “The Jet,” the 32-year-old sprinter lays claim to the title of the “Fastest Woman Alive” and is favored to win the gold medal in the 100m race.

In 2009 she was ranked the second fastest woman in history running the 100m race in just 10.64 seconds at the IAAF/VTB Bank World Athletics Final in Thessaloniki, Greece and this year USA Track & Field (USATF) honored Jeter with the Jesse Owens Award for Athlete of the Year. BE Next spoke to Jeter recently about her career which shows no signs of slowing down any time soon.