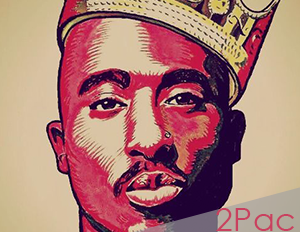 Today marks a monumental moment in the history of hip-hopÂ artistry: Tupac Shakur–a.k.a. 2Pac–has been inducted into the Rock & Roll Hall Fame in Brooklyn, New York.

We all remember Tupac’s style and swagger. But, more importantly, we remember the mark that he has left on culture. Â One of his most memorable hit songs is “Dear Mama,” which was heralded as one of the 25 songs tadded to the National Recording Registry in 2010. Â The Library of Congress has also referred to the track as “a moving and eloquent homage to both the murdered rapper’s own mother, and all mothers struggling to maintain a family in the face of addiction, poverty, and societal indifference.”

In the 100 Greatest Artists list published by Rolling Stone, 50 Cent shared, “Every rapper who grew up in the 90s owes something to Tupac. People either try to emulate him in some way, or they go in a different direction, because they didn’t like what he did. But whatever you think of him, he definitely developed his own style: He didn’t sound like anyone who came before him.”

Recently, I had the honor of chatting with a former BET executive vice president, who is also a minority owner of the Washington Nationals Baseball club and an urban television historian, Paxton Baker.

Check out the full interview with Paxton Baker below, which touches on some of our favorite 90s memories and is riddled with nostalgia, Â including mentions ofÂ  Video Soul with Donnie Simpson and Rap City: Tha Basement. Plus, Baker shares his vision for the curation the Black Heritage Auction, which includes items andÂ memorabilia from Tupac Shakur, and more:

Black EnterpriseÂ captured exclusive footage of some of the featured Tupac memorabilia that is available for auction.

Now, Tupac would not be Tupac, if there was not an ounce of controversy–even from the grave.

I caught up withÂ Bill Panagopulos, president of Alexander Historical Auctions, who stated the following:

“Over the past 30 years, my auction companies have sold 50,000 autographs, manuscripts, photographs, and other historical relics to collectors and institutions around the world. We have also worked on many occasions with the FBI and National Archives to recover stolen documents and help put thieves and forgers behind bars.

We are NOT involved in any litigation, complaint, or any other action with the Shakur Trust, nor anyone else for that matter. We have not heard from the trust, and we do not expect to. We remain absolutely confident that all of our consignors rightfully own every piece they’ve consigned to us.

The word is quickly getting out that our auction is totally unassociated with any legal action being taken by the estate, and the sale appears to have been unaffected. We warrant that we will pass good title to every buyer, as we have done tens of thousands of times in the past.”

All you can say is dear mama!

Be sure to follow Black Enterprise on all social media outlets for more information about Tupac’s crowning achievement, during the induction ceremony for the Rock & Roll Hall of Fame.