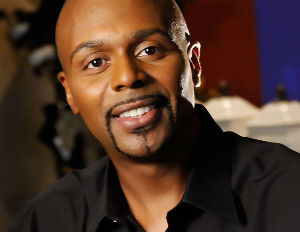 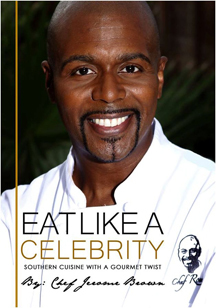 Chef Rome is a master craftsman in the kitchen and by all accounts, a natural celebrity in his own right. Not surprisingly, his passion for creating topnotch cuisine easily segued into the world of A-list celebrities, dignitaries and elite athletes. He’s been chef to greats such as Colin Powell, Shaquille O’Neal, Lamman Rucker, Priscilla Presley, Star Jones, Nancy Kerrigan, Carl Gustaf (King of Sweden), and Byron Cage, Mike Bibby, Cam Newton and more, capturing both national and international acclaim for his one-of-a-kind culinary creations.

Regularly featured as a celebrity chef at the prestigious Epcot International Food & Wine Festival at Walt Disney World with the likes of Cat Cora, Robert Irvine and Rock Harper, his dishes are amongst the most coveted. In 2011, he was featured on the Food Network’s reality show “Extreme Chef,â€ season one. That same year, he was selected to appear in the US Army series “I’ve Got Skillsâ€ which aired on ESPN.

BlackEnterprise.com caught up with the New Jersey/North Carolina native to discuss all things cuisine and explore his journey to culinary leadership and beyond.

BlackEnterprise.com: Let’s start from the beginning. How did you discover your passion for cooking?

Chef Rome: My mother was an excellent cook. Her pancakes were one of my favorite dishes. So, one morning I got up extra early and began to experiment with “herâ€ pancakes. Apparently she could smell my handiwork (probably because of all the smoke) and checked in make sure that I was okay. All she said was “Turn down the flame. It’s too high.” That was a turning point for me. She has always been my biggest inspiration and fan.

You’ve been extraordinarily successful even though you never attended culinary school. How do you think that has impacted your career?

My path has been anything but traditional. I never expected to become a celebrity chef or receive such incredible opportunities. But, here I am. I’m grateful.

I began formal culinary training in the military and continued to hone my craft by training with some of the best chefs in the industry. I entered the Army as a cook and left as a chef. I took the adage “Be all that you can beâ€ quite literally. It has reminded me to constantly expand my beliefs about what’s possible.

What I’ve learned is that there’s no one right path to anything. My passion, character and commitment have opened doors that would have otherwise remained closed.

Over the course of your career, you’ve worked with a lot of high profile individuals. How have you dealt with the pressure to perform?

I have resisted the urge to become “star struckâ€, which is easier said than done when you are surrounded by incredibly smart, talented and famous individuals. That being said, most of the people that I’ve worked with have high standards and enormous expectations. But, I have them, too. I bring my A-game to every client engagement.

I also realize that they’ve hired me for a reason. If they could do what I do, they wouldn’t need me, right? I want every client to have the very best culinary experience that I can provide. That inspires my performance. And, at the end of the day, we’re all just people. How we go about achieving success may look differently, but at our core, we’re all the same. When I think of it like that, there’s really no pressure to perform.

Despite your incredible success, you’ve likely experienced a few setbacks. Which do you consider the most significant and what have you learned from it?

Every year that I go back to the Epcot International Food & Wine Festival at Walt Disney World, I’m reminded that I was once a Disney cast member. I will never forget the day that I was fired because of poor performance. That was rough. Ironically, however, it was one of the best things that could have happened to me.

The experience revealed a critical performance gap–one that I would need to fill in the future if I wanted to be successful. I often share my experience with young, aspiring chefs to teach that being a chef is about far more than just cooking great food. It’s a lifestyle. It’s a commitment to excellence.

Sounds like you’ve learned a great deal about leadership along the way. You share some of these lessons in your new book, right? Tell us about it.

My cookbook is called Eat Like A Celebrity: Southern Cuisine with a Gourmet Twist.
It just won â€Best Cookbookâ€, which is one of awards given by the African American Literary Advisory Board each year. The awards ceremony will take place this year in West Harlem at the Mist on Sunday, October 26th.

It’s more than just a book of recipes. It also contains a mini-autobiography. It’s divided into 3 distinct chapters that focus on: my early years, celebrity, athletes and entertainers, and family, friends and my most requested dishes. I often share how the recipes were created and a few interesting stories about my celebrity clientele and their favorite dishes.

We’re sure you’ve got a few favorite dishes. Can you name one, or perhaps share your most popular dish?

That’s a tough one. It’s like asking a parent which child is their favorite–LOL. Seriously, though, my favorite and most popular dish would have to be the lobster pancakes with the apricot dipping sauce. In fact, the recipe is in the cookbook. When most people initially hear the name, they’re confused. They don’t think the two ingredients would go well together–until they taste it.

My foundation has orchestrated a Taste the World with Chef Rome tour, which will kick off next March in Dubai. The proceeds will be used to help aspiring young chefs attend culinary school. It will include fourteen exclusive restaurants, entries to all the sites, cooking classes hosted by yours truly and a few surprises along the way.

In addition to the tour, look for my next cookbook is coming and maybe a new TV show. I will keep you all posted!

You’ve given us a lot to digest. You’ve had mentors and people who’ve given you advice along the way. What’s your advice for someone considering a career in the culinary field?

Pursue your dream, despite perceived adversity. Develop a strong work ethic and an unyielding commitment to excellence. Your reputation is your calling card. It takes a lifetime to build. Guard it ferociously and govern yourself accordingly.

Karima Mariama-Arthur, Esq. is the founder and CEO of WordSmithRapport, an international consulting firm specializing in professional development. Follow her on Twitter: @wsrapport or visit her website, WordSmithRapport.com.