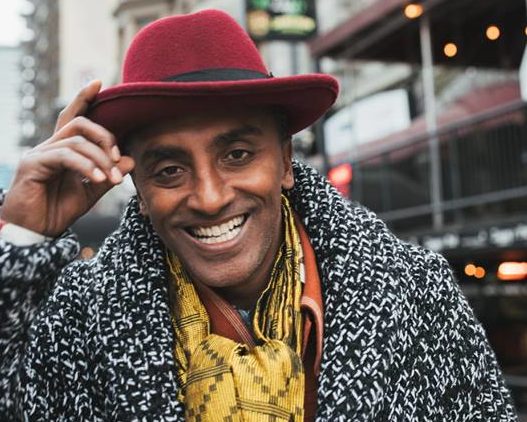 Earlier this week, marketing visionary Jeffrey Bowman hosted his third annual Total Market Summit at the venue Mist in Harlem, New York. REFRAME: The Summit is the first industry conference of its kind, helping brands and businesses prepare for the fact that (according to the Census bureau) minorities will become the majority by 2044, in addition to helping them truly understand the dynamics of a multi-cultural marketplace.

Harlem; which Reframe calls “the quintessential example of the new marketplace,” is home to celebrity chef and entrepreneur Marcus Samuelsson, as well as a quintessential snapshot of the potential that lives in minority entrepreneurs.

In 2010, Samuelsson competed alongside 21 world-renowned chefs on the Bravo television series Top Chef Masters and went on to win the competition.  In December of that same year, he opened the doors at his world class Red Rooster restaurant.

Samuelsson, who came to the United States in 1991 with $300 in his pocket, is also a best-selling author. In addition, he has gone on to create the Marcus Samuelsson Group, a hospitality-based enterprise that owns restaurants in six countries, as well as branded events and businesses.

Black Enterprise caught up with Samuelsson, who spoke at the Reframe: The Summit event at Mist in New York City.

BE: When you came to the United States to apprentice at Aquavit, what was your vision for your career?

Samuelsson: I prepared myself before. I worked in France before. I worked all over the world. So, I was prepared. I was ambitious, but there’s no way I could have predicted what happened. The lesson there is to be prepared and as a black man; be extra prepared, because there’s no hand out. When I came to the U.S. I had $300 in my pocket, but I was prepared.Â  I’d done the homework.

How did you create financial security while you pursued your passion? A lot of people get stuck on that.

The part of my finances that I could control was my own spending; that’s always something you can control. I had a roommate even when I started making six figures. A positive in that was that was my best friend. It helped him out, and it emotionally helped me out too; to come home to a place. It also saved me money, so I was able to put real skin in the game with my business versus just sweat equity.

So I didn’t go for the ‘stuff’ with my spending. At 23 to 28 [to] 29, I was ahead of where I thought I would be. I got a better job than I thought.I made more money than I thought, but I knew this could be taken away at any given time, so I’d better save up. Saving and staying humble were important to me. his allowed me to eventually buy my own apartment and then get my house.

Talk more about investments you made, in addition to your house?

My biggest investment was in myself. Investing in myself and what my parents could give me by traveling all over the world and learning; that was my college. Not just thinking about places I would like to go, but to actually go places and work there. It cost the same as going to college. It’s an education, but a different education than the linear way.

You had a lot of fiscal discipline in your personal life. Tell us how you bring that to your businesses?

It’s important to trust your talent and hold onto the belief that opportunities will come  and then be very editorial in selecting places to grow. Everything won’t work, so it’s important to pick things that matter. The big one for me was moving from Midtown to Harlem; that was a big risk. That’s like betting on a currency that you don’t know, but at least I was in control  I was betting on my own talent, and I believed that I could actually move people to come uptown and eat, and connect.

You were able to use your brand to create an enterprise: the Samuelsson Group.  How did that happen?

I had partners. At that point people came to me and I was very selective in the people I would partner with. I had to be sure that they wanted to join me in my vision. I was very fortunate in selecting partners that were in it for the right reason; building the brand, but also telling the narrative; understanding what the larger conversation was for us being in Harlem. We’re not anywhere, we’re in Harlem.  It would have been easier for them to take their money and put it into Apple stock, but it wasn’t just about money for them. They weren’t about getting their money right away.

Someone with that concern would not have been a good match for a partner for me. If you want to be part of reframing the conversation and having people come uptown and seeing our neighborhood, then we might be able to be partners. So, it was very important to me to vet the partnership; not just take money. It’s also about what’s right. We’re all winners if inner cities build up and create jobs. Who is to lose from that?

What would you tell entrepreneurs trying to build their brands into enterprises?

Network more; with each other and outside of our circle, and control what you can control which is your own expenditure: how well you live; all of those things. Be okay with being humble for a couple of years. You don’t have to go to the Hamptons and rent a house. You can put that money back into your company and save up for rougher days.