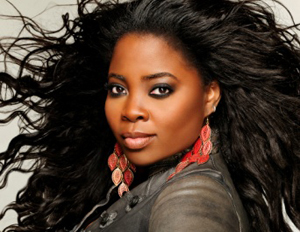 Though you may not know her name, you definitely know her work. Whether it’s in films including Dream Girls or Sparkle, with celebrities including Kerry Washington, Lady Gaga and BeyoncÃ©, or in the high-end fashion features of Vanity Fair and Vogue, Kimble has made her 20 years in the business count. Owner of Kimble Hair Studio in Los Angeles, she is also founder of her own haircare line, Kimble Hair Care Systems, which includes products for women of color with various hair textures.

Now she’s set her sights on expanding her brand as the star of WE tv’s LA Hair. Just in time for tomorrow night’s episode, BlackEnterprise.com caught up with Kimble to talk the day-to-day drama, negative beauty shop stereotypes, and how she plans to shed a different light on the haircare business.

A ROYAL START: Kimble’s first gig was on the set of Robert Townsend’s B.A.P.S (Black American Princesses), creating over-the-top ‘dos on Hollywood starlet Halle Berry in her role as Southern belle Nisi. While on the set of MTV’s Carmen: A Hip Hopera, she worked with a young BeyoncÃ© who was so impressed with her work that she decided to take her on as a stylist. She would eventually work on more TV and film sets including The Jamie Foxx Show, Two Can Play That Game, and Austin Powers in Goldmember.

PRIME TV OPPORTUNITY: Kimble wanted to educate people about her salon, her work ethic as well as introduce new consumers to her haircare line. What better way to do that than to be exposed to millions of TV viewers? Though Kimble is aware of the negative stereotypes associated with reality TV, she doesn’t sweat it.Â  “People love drama, and while our show has a bit of it, there is no one fist fighting. That’s just unacceptable,â€Â  she says. While there’s no fist fighting, the show does have its fair share of entertaining moments. “There’s definitely some [conflict]—like other stylists stealing clients— but even with drama, there is always a resolution.â€

REVERSE STEREOTYPES:Â  It’s no secret that there have been several complaints about the black hair salon experience. Whether it’s the tardiness of stylists or the hours lost waiting in the chair for a simple style, there’ve been many concerns about the industry standards.Â  Kimble hopes to change that. “I grew up in a salon. I was always the last client. With my salon, I try to make sure I treat the client right and make sure they get out at a decent time.â€