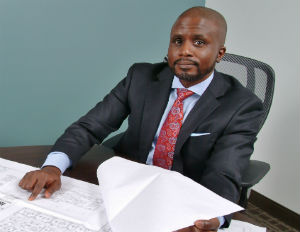 Hailing from Queens, New York, Ronnie Isaac inherited an iron-clad work ethic from his father. His father became the only self-employed African American owner of an established HVAC Construction Company in the early 1970s. He eventually bequeathed the business to his former employer.

As a young man, Isaac worked with his father and it had a profound effect on what he would eventually study in college: “He taught me how to successfully run a business as well as lay out what the risks of running a business would be.â€Â  Isaac also observed the concept of HVAC and became intrigued with how to solve problems that arose on the construction site in real time. This led him to pursue architectural engineering where he specialized in building design versus construction. He earned both a bachelor’s and a master’s degree in architectural engineering from North Carolina Agricultural and Technical State University.

Isaac is presently the CEO and founder of Isaac Engineering, established in 2006.Â  He has built over 16 years of experience in MEP design and a highly proven track-record in achieving revenue, profit, and market interest within startup and rapidly-changing environments. He has built successful relationships with decision makers in the engineering and construction industries.

Isaac’s Maryland-based firm is industry specific in its service offerings. As a cutting-edge architectural engineering firm, it acts as a liaison between the construction industry and the client, by ensuring that the building is aesthetically beautiful and functionally compliant according to building code regulations. The firm systematically reviews the form of the structure–to include building height, size, color, orientation–and ensures that quality materials are used to construct the building.Â  The functionality specifications includes the exact type of HVAC system, plumbing system, and electrical system used in building code regulations and safety occupancy.

Isaac Engineering will be celebrating and commemorating their 10-year anniversary on February 19, 2016.Â  Over the past decade, they have grown and developed many working relationships with teaming partners, mentors, and strategic collaborators.Â  The firm’s engineering focus and experience has been within mechanical, electrical, and plumbing design. With this highly-specialized experience, they have successfully designed all-purpose building projects in various sectors, including educational, medical, faith-based, municipal, residential and central utility.

Isaac Engineering is an African American owned, Maryland Department of Transportation (MDOT)-certified business with vast knowledge and experience with hospitals and data centers. This sets them apart from other firms in the region and led to them being selected as the minority prime engineer for a major project of the Prince George’s Regional Medical Center. The firm competed for this project and participated with two of the four design teams.Â  The project will encompass a new 650,000 foot in-patient hospital located in Largo, Maryland. This is one of the largest projects currently in progress in Prince George’s County.