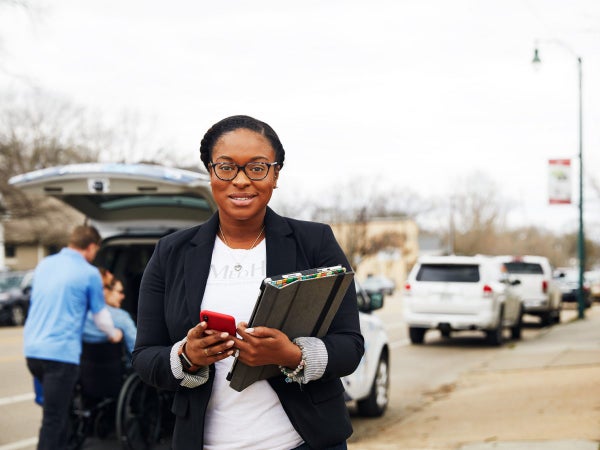 This entrepreneur is solving an important issue with her Memphis-based med-tech company. Erica Plybeah, CEO of MedHaul, is providing low-income and elderly patients a safe and easy way to get to their non-emergency medical appointments.

Plybeah is making life a lot easier for people with intellectual and physical disabilities who may otherwise have trouble securing proper vehicles to get to appointments.

“I wanted to find a way to positively impact patients and the healthcare providers who are [now] my customers,” Plybeah told Essence.

MedHaul is a streamlined, cloud-based service that also benefits clinics, hospitals, and other medical care venues who can now spend less time making travel arrangements for their patients. According to the reports, before MedHaul, booking rides for patients took clinical personnel an average of 11 phone calls and two and a half hours of staff time per appointment.

MedHaul, a Certified B Corporation, is making a difference in the transportation industry, too.

Plybeah noticed many Southeastern cities, like her current hometown of Memphis, were full of transportation vehicles there sitting unused for as much as 50% to 70% of the week.

“We partner with small transportation companies that have specialized vans that can accommodate wheelchairs and stretchers,” she said.

Even though Plybeah thought she didn’t want to be an entrepreneur after seeing her Liberian father—an owner of printing shops—appear stressed often, she took a chance at it anyway.

She found out about the Memphis Medical District Collaborative Operation Opportunity Challenge, a competition to find aspiring entrepreneurs who could create solutions for operational problems in Memphis’ medical district.

“Transportation management was one of their top pain points,” she said.

Though she initially missed the deadline, applications reopened for an extension. She submitted her business plan, became one of the two challenge winners, and was awarded $20,000 toward financing her startup.

“That just kind of fueled the fire,” Plybeah said.

She completed the Epicenter Logistics Accelerator and received another $50,000 in startup capital. She also participated in the Google for Startups Accelerator for Black founders.

The CEO was able to get her technology launched with help from software engineers and has been on the ground running since.

In the two years since MedHaul’s launch, the company has facilitated about 9,000 rides to date and continues to expand as Plybeah adds to her virtual team.

She plans to keep her focus on expanding her business in the Southeast, where she says there is a lot of need.

“I’ve seen over the years that innovation typically skips over the communities that need it. The Southeast has some of the lowest income and sickest people. This is where we need innovation. Everything doesn’t always have to go to San Francisco or New York.”