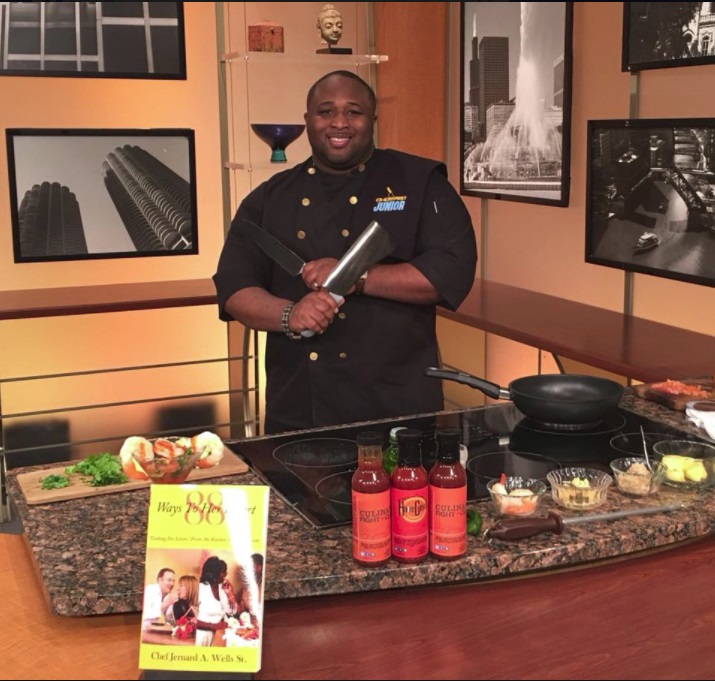 Name: Jernard Wells, a.k.a ‘The Chef of Love’

‘Men that cook’ is not a trend that started with network television; there has always been a male presence in kitchens. For many centuries, the culinary arts have been dominated by men. At a young age, Atlanta-based chef Jernard Wells quickly understood the power, comfort, and importance of food in his family as well as in other African American communities across the country, as part of our history, heritage, and identity.

“My father was a chef, by trade, and my mother owned a clothing line, so that is where I get my entrepreneurial spirit,” Wells says. “I had no intention of becoming a chef. If anyone asked me what I wanted to become [when I got older], I would say a lawyer.”

Why was Wells bitten by the cooking bug at such a young age? Wells attributes this to his grandfather’s influence. “My fondest food memories are whenever I was with my grandfather. He owned a farm in Mississippi, and we would help him cut and cure meats in the smokehouse. It’s about the bonding experience we shared with one another, more than the food [itself]. I will cherish those memories always,” he tells BE Modern Man.

Inspired by his family’s creativity and entrepreneurial drive, Wells channeled his inherent knack for the culinary arts into something that would enable him to generate income on his own terms. “At 18, I opened a restaurant in my mother’s kitchen with just $50, because I wanted to purchase a car during my senior year of high school. Fortunately, I ended up making $3K a month, and I was able to open a brick-and-mortar space next to an HBCU in Holly Springs, Mississippi,” he says.

One day, Wells’ pursuit of culinary happiness came to a halt when his skills in the kitchen were called into question.“A guy insulted me, telling me that I was not a real chef, due to my lack of education. That’s when I decided to attend culinary school, to earn the title and become official. I attended Memphis Culinary Academy, specializing in French and Cajun cuisine, and later attended the Art Institute of Atlanta,” he tells BE Modern Man.

Almost two decades later, armed with multiple degrees and witty panache, Wells’ list of accomplishments reads like a how-to guide for succeeding in today’s celebrity chef world. America first fell in love with the young “Barry White of food” as he developed his brand as “The Chef of Love,” with multiple appearances and wins on Cutthroat Kitchen. His cool and calm demeanor, even while under extreme pressure, defied stereotypical portrayals of men of color often found on television. Wells was also runner-up on the twelfth season of Food Network Star, participated in the World Food Championship, and recently appeared as a judge on Chopped Junior.

“I had published three books before even appearing on Food Network, but it was [still] a dream come true! My first appearance on the Food Network opened the door for me to compete on The Next Food Network Star,” he says. In addition to showcasing his culinary expertise on television, Wells has also launched his own line of sauces and seasonings and has even earned culinary associations with Barack Obama and Tyler Perry.

With a unique platform centered on the idea of combining food and love to create a perfect balance within a relationship, Wells says, “[Television] allowed me to share myself and what I stand for with the world, which I call the ‘four Fs’; faith, family, food, and fun. Now, I own nine restaurants, a production company, and I collaborate with one of the biggest knife companies in the world—but, I’m always thinking about what’s next.”

Wells asserts that the most important role he has ever played is that of a loving husband and doting father to his nine beautiful children. His love for his family is what drives him to create a legacy that will stand the test of time, much like those who came before him in the development of black cuisine, from innovative slaves, to White House visionaries; from black culinary legends like Edna Lewis, to contemporaries like G. Garvin, Marcus Samuelsson and Carla Hall. “My goal is to be everything for my family. Everything I do is for them,” he says.

Being a BE Modern Man goes beyond winning a tournament; it’s about understanding how to cultivate and live an ordained life. Wells’ profound understanding of this is what has helped propel his journey to the top.“I want to use food to aid in bridging the gap between children and adults and continue creating and providing opportunities for all. We must pay it forward,” Wells states. “There is an even higher standard that I need to uphold. I have set the bar to show more and give more. Being honored means you have to honor others. Also, [my accomplishments and the legacy I’m creating] shows my family that their lives [and hard work] were not in vain.”

Centered around the idea of love, family, Wells’ successful body of work helps cultivate the next generation of BE Modern Men through inspiration. “We shouldn’t be worried about winning, but more concerned with getting the message across. My life has been mapped out into the ultimate blueprint for achieving this. If we want to reach our young people, we need to create platforms that open doors for others and hopefully inspire the next generation—even the next ‘chef Jernard,’” he continues.

Wells’ advice to BE Modern Man hopefuls? “Do it for love and not for money. If you do it for fame and success, you might never achieve it.”