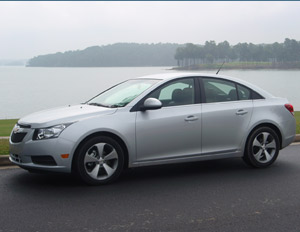 Not only does Chevy’s compact sedan get a new exterior design, but a new name, too. GM has sent the aging Cobalt to car heaven, replacing it with the all-new, world-class Cruze. Unlike the Cobalt, which was available as both a coupe and sedan, the Cruze is currently available as a sedan. Sweet!

Besides a new name, the big change for the conservatively designed compact is its upscale, premium-class, two-tone interior with its sliding front-center armrest and richly detailed instrument panel that’s backlit with ice-blue LED technology. This is the same high quality design one can expect to find in the upscale Lexus-like Buick LaCrosse sedan. The Cruze is outfitted with features typically reserved for higher priced vehicles. The vehicle I tested was equipped with a nine-speaker audio system, power driver’s seat, rear audible parking sensors and a remote vehicle start system (an app is available, too).

Also, leather heated front seats, a nav system, lighted doorsill plates, 18-inch wheels and a tricked-out version of the Cruze known as the RS is available. The RS Appearance package enhances the styling by adding rocker moldings, a rear spoiler and fog lights.

Unlike the vehicle the Cruze replaced, the front seats no longer make passengers feel like they’re seated on the floor. The roomy front seats are both supportive and comfortable.

While this is arguably the best compact vehicle that GM has ever built–excluding the joint venture vehicles they once had with Toyota–there’s still some room for improvement. The $21,000 Cruze I reviewed lacked an optional power sunroof, keyless push-button starter and lighted vanity mirrors. It also lacked an in-dash navigation system. However, GM’s subscription-based OnStar System offers a unique turn-by-turn system, which provides the directions on the radio screen. Unfortunately, after the six-month free subscription expires, drivers will have to pay out of pocket for the service. Now for those stepping into the 2LT and LTZ trims, a nav system is available. While the vehicle is loaded with equipment expected on larger vehicles, the lack of rear seat legroom will immediately remind you that this is a compact.

While pricing for the base Cruze starts at approximately $17,000, a well-equipped Cruze can easily zoom to $27,000, going head-to-head with a well-equipped full-size Malibu. That’s a tad too much to pay for a compact.

Besides pricing, though, this is arguably one of the best compact sedans on the market. It should be interesting to see how the Cruze stacks up against the upcoming redesigned Ford Focus and Honda Civic when they hit the market later this year.