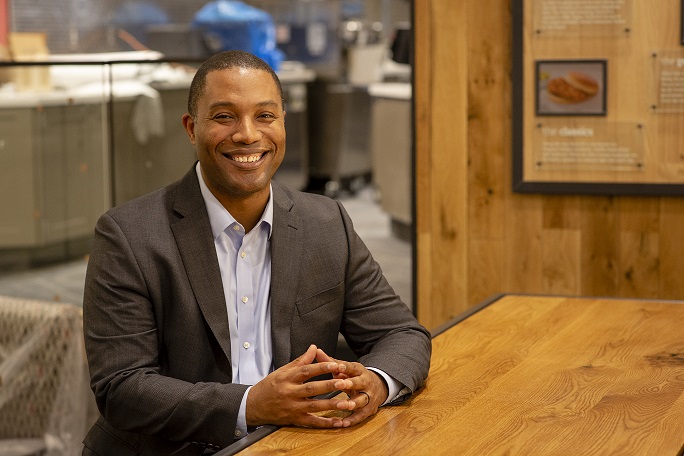 I suspect many of us fell in love with Chick-fil-A after sampling their free nuggets in a local mall. Well, that’s exactly where Kevin Young’s journey to become a Chick-fil-A franchise owner started—he just didn’t know it. Young grew up in Maryland, graduated from the U.S. Naval Academy in 2001, and eventually reached the rank of lieutenant in Nuclear Engineer, specializing in submarine warfare and responsible for processing and verifying national nuclear launch orders. He and his wife then moved to Ohio for seven years, and eventually landed in New York when his wife took a position with Anheuser-Busch in 2013.

Over that 12 year span, Young used the skills he acquired in the Navy to land numerous positions with high profile companies including project manager at Procter & Gamble; associate at Goldman Sachs; and most recently, an executive at the Federal Reserve Bank of New York where he led the largest currency processing operation in the country, handling more than 19 million banknotes each day.

Although the answer may seem obvious since we all see how crowded Chick-fil-A can get, Young’s journey has very little to do with money or profit, and everything to do with customer experience.

From the time he and his wife were eating at a Chick-fil-A and one of the employees walked them to their car with umbrellas when it was pouring down rain, to the incredible mentorship he received when he asked one of the franchisees in NYC if he could volunteer at his restaurant to learn more about the business, Young had memorable experiences with Chick-fil-A. So much so that he felt that being an owner would allow him to provide that same great experience to others.

Young says he grew up knowing he would like to own his own business but had no idea what that would be. Owning any kind of business, let alone one of the top fast-casual restaurants in the country seemed out of reach due to the high investment cost. However, as it often does, fate stepped in.

In 2013, he attended a Service Academy Career Conference. Franchisors often attend, speak, and/or exhibit at events that cater to former military because military men and women candidates make some of the best and most profitable owners, due to their level of discipline and ability to follow a system. Chick-fil-A was at this event and that’s where Young learned about their unique ownership model, only requiring a $10,000 investment up front.

As he began the process, he wasn’t very optimistic. What most people don’t realize is that Chick-fil-A receives more than 40,000 inquiries from franchisee candidates every year. Of those candidates, they select just 100 new franchisees on average. In addition, Chick-fil-A has specific growth markets where they are looking to expand.

Kevin’s background was mostly in operations and engineering, but very little, if any, in sales and marketing. As he continued to get called back to Chick-fil-A for additional interviews, his confidence grew.

However, he still felt that he needed to gain more knowledge and experience to show the Chick-fil-A corporate office that he was serious about becoming an owner and that he would be a great addition to the team. So not only did he go back to school and earn his M.B.A. from the University of North Carolina – Chapel Hill but in 2016 he met a few owners and asked one of them if he could volunteer at their store to learn the business. In the fall of 2017, Young was awarded a Chick-fil-A franchise and is scheduled to open in midtown Manhattan in November 2018.

Passion for the Brand and the Community

When I asked Young what’s driving him during these long and hectic days leading up to the store opening, he says “passion for the brand and the community.”

Over the past month, he’s been interviewing and has hired about 80 new team members. He shared that just hearing their stories about where they grew up and their experiences with Chick-fil-A has been inspiring and motivating. He sees himself in them and is excited to provide direction for late teen and early 20’s team members that aren’t quite sure what life has in store.  Young is feeling motivated about helping to inspire future leaders, developing the team, and sharing his experience in the military with those that might want to consider that as an option.

For aspiring entrepreneurs, Young advises that you make sure you invest in your team. That doesn’t stop with hiring and a paycheck. You have to inspire, motivate, and encourage—daily. And from his experience in the corporate world, Young learned that continuous improvement is key to “avoid complacency.” Lastly, continue to be a sponge. Find a mentor that will help coach and develop you to become a better leader. And for aspiring Chick-fil-A owners, Young says the company requires you to be a full-time owner/operator. That means, “hands-on, willing to roll up your sleeves to grow the business and drive the team.”

There’s little doubt that Kevin Young will be a successful Chick-fil-A owner/operator. With a strong brand, world-class franchise system, and his passion behind him, the Midtown Manhattan neighborhood will welcome him with open arms.